Labour Party whip in the Seanad Senator Aideen Hayden said she will be speaking to Labour members who were absent last night when the Government lost a vote.

A private members' bill proposed by Senator Feargal Quinn dealing with upward-only rent reviews was carried by 27 votes to 23.

Labour Senators John Kelly, Denis Landy, Jimmy Harte and John Whelan were expected to be present and vote with the Government.

Had they done so, the vote would have been tied 27-27 and the Government would have defeated the motion with the casting vote of Seanad Cathaoirleach Paddy Burke.

Ms Hayden said anyone who was absent and not paired would be spoken to, as they would be in the normal course of events.

She declined to go into detail on any disciplinary measures which the Senators might face.

Meanwhile, Minister for Communications Pat Rabbitte has said that it is important that Eamon Gilmore continues to lead the Labour Party.

Mr Rabbitte said that this week’s Irish Times/Ipsos MRBI poll results for the party were disappointing.

However, he said that Mr Gilmore had been the most effective leader of the Labour Party in its history and that he was the best person to "steady the ship".

Minister Rabbitte said it was a matter for the Tánaiste as to whether he wished to remain in the Department of Foreign Affairs.

Speaking ahead of a wind energy conference in Galway this morning, Pat Rabbitte said many people had "not internalised" the situation the country was in when the Government came to office in 2011.

He said the Government had pulled the country back from the brink during the first half of its term of office and its task for the next half was to get people back to work.

Asked about the absence of four Labour senators from a vote on upward only rent reviews in the Seanad last evening, Minister Rabbitte said he "knew nothing about that".

He said it was important that the Labour Party held its nerve and steered a steady course towards recovery.

The minister said he felt Mr Gilmore was taking a lot of flak for the economic woes of the country and that a great deal of this was unfair.

Alluding to Shakespeare, Mr Rabbitte said of his party leader: "Uneasy the head that wears the crown".

He said Labour seemed to be getting 100% of the blame for the "shipwreck economy" the coalition inherited from the previous administration. 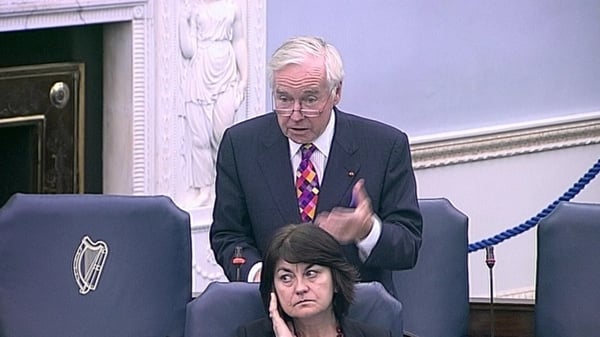