Fine Gael's Richard Bruton and Fianna Fáil leader Micheál Martin have taken part in the RTÉ Prime Time debate on the abolition of the Seanad.

Mr Bruton, who is Fine Gael director of elections, represented the party after Taoiseach Enda Kenny declined an invitation to take part.

Minister Bruton advocated a Yes vote, while Mr Martin represented the No side.

They were joined by an audience of campaigners and voters ahead of the referendum on Friday.

Mr Bruton said it is the job of the Government to deliver the savings from the abolition of the Seanad.

He defended the €20 million figure the Government said will be saved annually if the Seanad is abolished.

Mr Bruton said the vote to abolish the upper house would bring Ireland into line with best practice in countries such as Sweden and Denmark.

He said it would deliver one of the most fundamental changes to politics since the foundation of the State.

Minister Bruton said the Seanad was deeply undemocratic and ineffective and was last elected by 1% of the population.

Mr Martin said a Yes vote would deliver a weaker parliament and would not give better legislation, just more power to the Government.

He said the Government's campaign was dishonest and was promising savings that would never materialise.

Mr Martin said the savings were a lie and no-one in officialdom had endorsed the €20m saving, saying it was one of the big lies of the referendum.

He said a reformed Seanad could provide greater expertise and a diversity of opinion that Ireland needed.

The Fianna Fáil leader accused the Government of blocking reform and said the only way to force serious reform of Irish politics was to vote No.

She said the party has a clear position campaigning for a Yes vote which "is distinct and separate from that of the Government, yet RTÉ has chosen to exclude us from the most significant debate in this referendum campaign".

Ms McDonald said RTÉ had a responsibility to ensure the debate was fully representative.

She also said she believes Mr Kenny should have taken the opportunity to debate the issue.

Elsewhere, Fine Gael has begun its mobile billboard ad calling for the abolition of the Seanad.

Speaking at the launch, Mr Bruton said he believes there is huge engagement with the referendum and a huge appetite for change.

He said he expects the turnout will be higher than predicted, with half of voters casting a ballot.

Dublin City Council has apologised after it issued polling cards directing some voters to the wrong polling station and to voters who are deceased.

The council said an error occurred with the printing of polling cards for the two referendums and it has sent letters to those affected.

The error affects new voters who have not yet received their polling cards and those who recently changed their address, with cards being sent to former addresses.

The council also apologised unreservedly to the families and relatives where polling cards were sent to voters who are dead.

Voters do not need their polling cards to cast their vote, but must bring a valid form of identification, such as a passport or driver's licence. 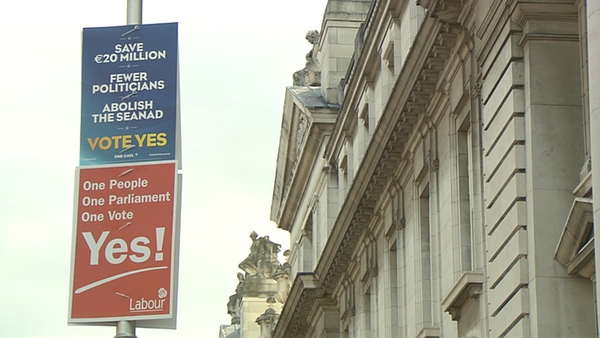