A new opinion poll shows a large majority of voters in favour of the abolition of the Seanad.

Tomorrow's Sunday Independent/Millward Brown was conducted between 13-25 September among a sample of just under 1,000 voters

The poll found that 37% favour abolition of the Seanad; 20% want to retain the Upper House of the Oireachtas, while a large group, some 32% remain undecided.

One in ten people surveyed say they will not vote.

However, when the undecided voters are excluded the margin is 64% in favour of abolition and 36% against the Government proposal that will be put to the people on 4 October.

The tracking poll on party support shows Fine Gael at 28% up one point on the last comparable poll in August.

The other party in Government, Labour saw its support rise by two points to 10%.

Fianna Fáil is also up two points bringing it to 27%, just one point behind Fine Gael.

Sinn Féin at 19% is down two, while Independents/Others at 15% see a significant drop of five points support for them.

It comes as Taoiseach Enda Kenny has refused to take part in a television debate on the upcoming Seanad referendum.

RTÉ says it was informed by the Government Press Secretary late yesterday that the Taoiseach was declining an invitation.

Fianna Fail leader Micheál Martin had already agreed to represent the 'no' side.

Mr Kenny has responded to criticism over his decision not to take part in debate saying that Fianna Fáil leader Micheál Martin was "looking for notice and an opportunity".

Speaking as he canvassed for a 'yes' vote in Dublin today, the Taoiseach said Mr Martin had "no occasion to be deemed the leader of an Opposition to this Referendum."

He said this was a matter for the people's choice.

Mr Kenny said that all of the political parties had failed to deal with the question of the Seanad.

But it was his privilege to be able to "follow through on a commitment" that the Government had made to ask people whether they wanted to keep or "get rid of" the Seanad.

He said his choice was to "get rid of it" because it had no power, no influence and no constitutional responsibility in holding the executive to account.

He said only one per cent of the Irish people could elect the members of the Seanad.

He said it was "People's Choice, People's Power - Nothing can be more democratic than that".

RTÉ has said the debate will go ahead this Tuesday and alternative arrangements are being made to find a speaker to represent the 'Yes' campaign.

The 'Yes' campaign argues the Seanad is costly and ineffective while the 'No' campaign says the upper house is essential to Ireland's democracy.

A Fianna Fáil spokesperson commented, "We're deeply disappointed that the Taoiseach has decided not to engage in a proper debate about this fundamental change to the country's constitution.

"The very least people could have expected was that the Taoiseach would have the courage of his convictions and would seek to discuss and debate what is his personal initiative."

He further claimed that this was why Mr Kenny wanted to get rid of the Seanad in the first place.

Former senator Mr O'Toole is part of the Democracy Matters group which is advocating a 'no' vote - against abolition - in the referendum. 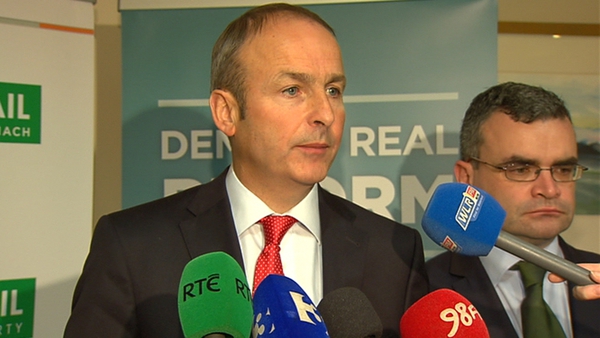