The United States and Russia have agreed on a draft UN Security Council resolution that would demand that Syria give up its chemical weapons.

The resolution does not include a threat of military action if it fails to comply.

However, the US said the resolution would make Syria legally obliged for the first time to give up its chemical stockpile.

The investigations include three incidents around Damascus after the 21 August attack that almost triggered US air strikes.

The inspectors expect to finalise their work in Syria on Monday and issue a report by late October.

The report will give more details of last month's incident, which they have already said involved the use of sarin gas, a statement from the United Nations in Damascus said.

The United States and its Western allies said the initial report showed Damascus was behind the attack, which killed hundreds of people.

The incidents also include an alleged chemical weapons attack in March in the northern town of Khan al-Assal, where authorities say rebels killed 25 people, including 16 soldiers.

Rebels said government forces were behind it.

The two other cases from earlier this year both date back to April - one in the Aleppo district of Sheikh Maqsoud and another in the town of Saraqeb in the northern province of Idlib.

The three most recent incidents were in Bahhariyeh and Jobar, both east of central Damascus, on 22 and 24 August and Ashrafiat Sahnaya to the southwest of the capital on 25 August, the UN statement said.

A draft agreement, which is due to be voted on tonight, calls on members of the Organisation for the Prohibition of Chemical Weapons (OPCW) to make cash donations to fund Syria's fast-tracked destruction operation.

The 41-member executive council of the OPCW is due to discuss and vote on the proposal at 9pm.

It needs a simple majority to be passed, but decisions at the body are normally agreed upon by consensus.

It requests urgent funding to hire inspectors and technical experts to destroy what western intelligence agencies believe is about 1,000 tonnes of sarin, mustard and VX nerve agents, built up over decades and spread over dozens of locations.

An OPCW official said an advance team would head for Syria on Monday.

Established to enforce the 1997 Chemical Weapons Convention, the OPCW has an annual budget of under €74m and less than 500 staff.

It does not have the manpower to carry out the task without significantly increasing resources.

Experts have said it will be risky and expensive to destroy the chemicals in Syria, where a civil war has killed more than 100,000 people and displaced millions more.

Syria has just nine months to do what some countries, including Russia and the United States, have taken more than a decade to do. 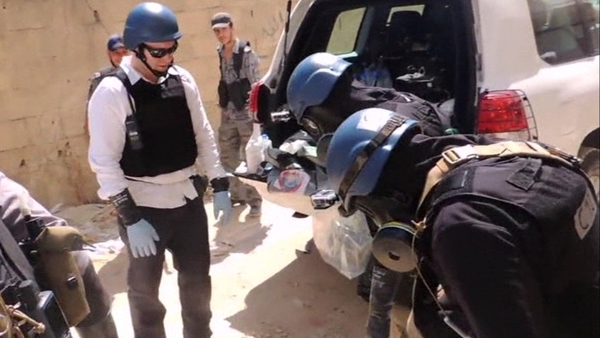 Russia and US agree UN draft on Syria