Divers have found what they believe to be the last two missing bodies from the sea where the Costa Concordia cruise liner sank last year off the Italian island of Giglio.

The ship was carrying more than 4,000 holidaymakers and crew when it capsized after striking rocks on 13 January 2012 killing 32 people, including two whose bodies were not recovered.

Head of the civil protection agency Franco Gabrielli told reporters the remains discovered were "absolutely consistent" with the two missing people, an Indian man and an Italian woman.

However, their identities could only be definitively confirmed after DNA testing, he added.

After lying on its side in shallow water ever since capsizing, the Costa Concordia was hauled upright last week in a complicated 19-hour salvage operation.

Recovering the submerged bodies after 20 months under the weight of the 114,500 tonne vessel was "almost a miracle", Mr Gabrielli said.

The vessel is due to be towed away from the Mediterranean holiday island, probably by next spring, and eventually broken up into scrap. 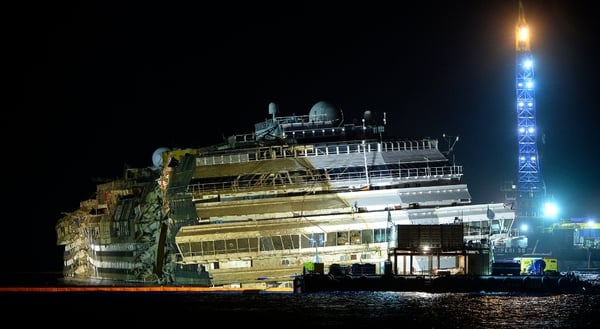