Minister for Agriculture Simon Coveney is in talks with the Department of Finance to tackle the shortage of new agricultural land available to young farmers who want to expand.

Mr Coveney also said he did not think next month's Budget would be as tough for agriculture as it was last year.

The minister said he was discussing fresh incentives for older farmers approaching retirement to lease expensively-priced land to younger farmers and still be able to claim their retirement benefits.

Farmers who currently lease their land for ten years are not eligible for retirement incentives.

Mr Coveney said the last two Budgets had seen tax incentives for long-term leasing and he was looking to do more around that area.

He said there was currently more demand for agricultural land than there was supply, which meant land prices in Ireland were far too expensive.

Mr Coveney also said he wanted to come up with ways of allowing a new generation of productive farmer interested in expansion to do just that.

The minister said he was hoping to do "some positive and innovative things with the tax system if we can get agreement from the Department of Finance on that".

He said the department understood the issue.

At the heart of the strategy are incentives to encourage more land to become available on longer-term leases of seven to ten years, which would allow for more medium-term planning and investment decisions among those farmers leasing land.

Most of the land currently rented was on a conacre basis - for less than 12 months - and this was a problem, Mr Coveney said.

Farmers traditionally used short-term leases to prevent any transfer of security of tenure.

Mr Coveney said the leasing of land rather than the purchase of land was how he expected most young farmers to expand unless they have very significant assets.

The minister said his twin objectives were to fulfil the potential of agriculture within Ireland in supporting those farmers who run a good business and support those farmers who do not have enough capacity to produce more for the marketplace.

Later, speaking in the Dáil he said that he hopes the last round of negotiations over the EU's reform of the Common Agricultural Policy go well.

Mr Coveney noted that discussions are due to be finalised with the European Parliament today.

Among the outstanding issues include the reduction of grants, flexibility of the rural development pillar and levels of co-funding. 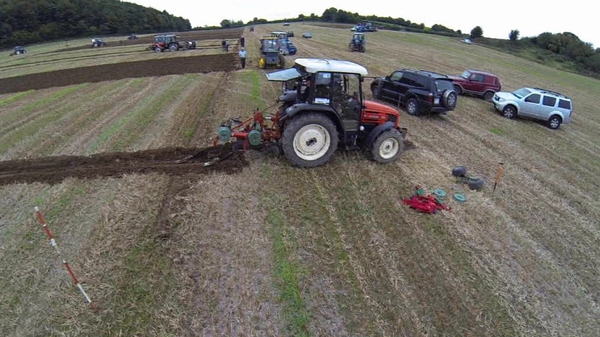 Over 80,000 attend day one of ploughing championships