German Chancellor Angela Merkel has said that European policy towards Ireland will not change after her conservative party secured an emphatic victory in her country's federal election.

Ms Merkel's Christian Democratic Union scored its best result in 23 years to put her on course for a third term.

The party won 41.5% of the vote and finished only five seats short of an absolute majority in the lower house of parliament.

However, she will need to reach out to centre-left rivals to form a new government after her coalition partner crashed out of parliament.

Asked about Ireland, Ms Merkel said: "Our course of European policy will not change.

"Ireland has made good progress, this progress was not made in Germany, it was made in Ireland on the basis of the Irish understanding that things had gone wrong in the past few years.

"I'm grateful to my colleague Enda Kenny for implementing the reforms so passionately. Ireland is one of those examples where it can be shown that things are improving."

"Ireland has remarkably lower yields [on its bonds]. I want to express my sincere respect for what Ireland has achieved over the past couple of years. Those developments are good and important for Ireland."

Minister of State at the Department of Finance Brian Hayes has described Ms Merkel’s remarks as "very warm".

Speaking on RTÉ’s News At One, Mr Hayes said that retrospective recapitalisation of Irish banks had not been taken off the table, but it was a medium-term project.

He said the more Ireland did to tackle its problems and continue to grow the economy, the easier it would be to win support at key moments.

Mr Hayes said there was an appreciation in Germany of the sacrifices made by the people of Ireland to become the first of four eurozone countries to emerge from a bailout programme.

Ms Merkel would not speculate about the shape of her next government, but made clear she plans to serve a full term.

"I see the next four years in front of me and I can promise that we will face many tasks, at home, in Europe and in the world," Ms Merkel said during a television appearance with other party leaders.

Despite the scale of her win, governing is unlikely to get easier for Ms Merkel.

Her partners of choice, the pro-business Free Democrats, won only 4.8% of the vote.

They fell short of the 5% needed to win seats in parliament for the first time in Germany's post-World War II history.

Ms Merkel looks likely to end up leading either a "grand coalition" government with the centre-left Social Democrats of defeated challenger Peer Steinbrueck - reviving the alliance that ran Germany in her first term - or, less likely, with the environmentalist Greens.

Either way, several weeks of difficult negotiations are expected.

Ms Merkel's conservatives finished far ahead of Mr Steinbrueck's Social Democrats, who won 25.7% of the vote - not much better than the post-war low of 23% they hit four years ago.

Their Green allies polled a disappointing 8.4%, while the hard-line Left Party scored 8.6%.

But although the three parties on the left together hold a thin parliamentary majority, there is virtually no chance of them governing together.

SPD chairman Sigmar Gabriel this afternoon said his party was open to talks with Ms Merkel on a coalition, but the party would not automatically agree to share power.

"There is a search for a possible formation of a government and the result is open," he said.

He added that if Ms Merkel invited his party to talks, the SPD would not refuse.

Ms Merkel said earlier she had been in contact with the SPD.

However, many SPD members are reluctant to enter a grand coalition with Ms Merkel and the party is likely to take a tough stance in any negotiations. 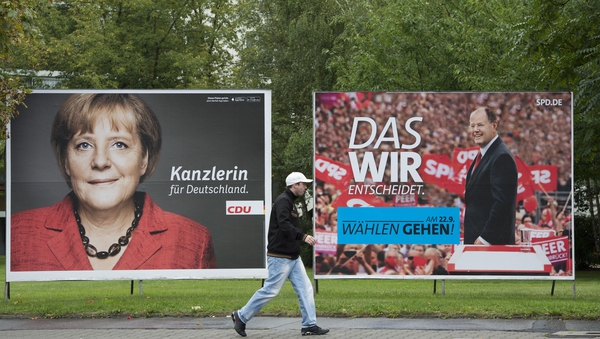