Voters in Sri Lanka's north have thronged polling stations in the first election there since the military crushed separatists and ended a 26-year war.

The provincial council election is the first in 25 years in the north, once the heartland of Tamil Tiger separatists.

Long queues of patient voters formed in the morning at polling stations. Most had a holy ash mark on their foreheads, a sign they had attended prayers at Hindu temples.

Many voters called for restitution of land, the departure of the national army, accused of human rights abuses in the final stages of the war, and some even for a separate state.

Some candidates complained of intimidation and irregularities.

Residents complained of intimidation, saying the military visited their homes to tell them not to vote for the TNA.

The party is the former political proxy of the defeated rebels, who launched the war for a separate state to end what Tamil activists saw as systematic discrimination by Sri Lanka's Sinhalese majority.

The TNA's main candidate, CV Wigneswaran, told the chief electoral officer that his sister had received a visit from military personnel at her home near Jaffna.

Yesterday, a member of an election monitoring group was attacked, along with nine TNA supporters, by a group of gunmen said by the victims to have been wearing military uniforms.

Mr Rajipaksa has a majority of more than two-thirds in parliament and controls the eight other provinces.

The president has faced international pressure to bring to book those accused of war crimes committed at the end of thewar, and to boost reconciliation efforts.

His government has rejected accusations of rights abuses and Mr Rajapaksa in July ordered an inquiry into mass disappearances, mostly of Tamils, at the end of the war.

The military rejects any suggestion of involvement by the security forces in violence of any sort.

Near many polling stations, posters with images of guns told voters to "think twice" and asked if they "want to go for another war" and whether they "really need to vote for TNA". 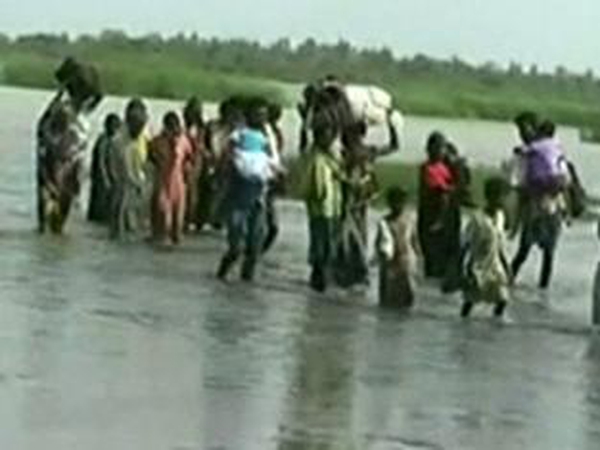 Ban to push for access to Sri Lanka displaced