Syrian President Bashar al-Assad has denied he was responsible for the chemical weapons attack in Damascus last month.

In an interview with US television network CBS, Mr Assad said the evidence of a chemical attack was not conclusive.

"There has been no evidence that I used chemical weapons against my own people," he told CBS in Damascus.

He suggested there would be retaliation by those aligned with him for any attack on Syria.

Mr Assad also said he was very concerned that an attack on Syria would degrade his military and tip the balance in the conflict.

His comments came after US Secretary of State John Kerry said the US had not ruled out the possibility of returning to the United Nations Security Council to secure a resolution on Syria once UN inspectors complete their report.

Speaking at a news conference in Paris with his Qatari counterpart Khaled al-Attiya, Mr Kerry said US President Barack Obama had yet to make a decision on the issue.

He met representatives of the Arab League to discuss the conflict in Syria and the international response to the chemical weapons attack on 21 August.

"All of us agreed - not one dissenter - that Assad's deplorable use of chemical weapons, which we know killed hundreds of innocent people ... this crosses an international, global red line," he said.

Mr Kerry said the US was leaning towards supporting a G20 statement - already signed by 12 countries - that called for a strong international response.

The meeting with Arab ministers, including from Saudi Arabia, Egypt, Qatar and the United Arab Emirates, followed talks in Lithuania over the weekend with European foreign ministers.

French President Francois Hollande yesterday suggested he could seek a resolution at the Security Council despite previous Russian and Chinese vetoes.

Mr Hollande is under pressure at home and among European partners to seek a UN mandate before any military intervention.

The UN inspectors' report is expected to be issued by the end of the week.

Elsewhere, Mr Obama has urged Americans to back him in launching an attack on Syria.

Mr Obama has returned from a European trip in which he failed to forge a consensus among global leaders.

He has plunged into a campaign on radio and television to try to convince a sceptical US public and Congress of the need for a military strike.

Mr Obama emphasised he favoured limited strikes to deter future chemical weapons attacks and not another costly and protracted conflict.

"This would not be another Iraq or Afghanistan," Mr Obama declared in his weekly radio address, previewing arguments he will make in a nationally televised address on Tuesday.

"I know that the American people are weary after a decade of war, even as the war in Iraq has ended, and the war in Afghanistan is winding down. That's why we're not putting our troops in the middle of somebody else's war," he said.

President Obama will give interviews tomorrow to the three network news anchors, as well as PBS, CNN and Fox News, more evidence of a "full-court press" strategy before pivotal congressional votes on military strikes in Syria.

The interviews will air during each network's Monday evening news broadcast, the White House said.

Iran's new foreign minister Mohammad Javad Zarif has warned the US it will ignite a fire across the Middle East if it attacks Syria.

Mr Zarif said: "We are concerned about warmongering in this region.

"Those who are short-sighted and are beating the drums of war are starting a fire that will burn everyone."

He was speaking at a news conference in Baghdad during his first official trip abroad since taking office. 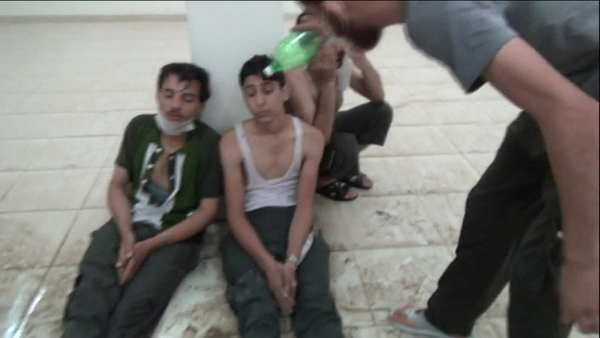