He said afterwards that a wave of terrorism by opponents of the military-installed government was just beginning.

The minister, Mohamed Ibrahim, had been involved in overseeing a violent crackdown on supporters of Mohammed Mursi, the elected Islamist president who was overthrown two months ago by the army following mass protests against his rule.

No organisation immediately claimed responsibility for the attack, the biggest yet on the new government.

Mr Mursi's Muslim Brotherhood - accused by the government of terrorism and inciting violence - condemned it.

But it showed the risk that Egypt's political crisis could spawn a wave of Islamist attacks like those in the 1980s and 1990s.

"What happened today is not the end but the beginning," Mr Ibrahim said.

Cairo’s head of security, Osama Al-Saghir, said the ambush began seconds after Mr Ibrahim left his house in the capital's Nasr City on his way to work.

A car driving ahead of the convoy exploded and the minister's armoured car also came under heavy gunfire, Mr Saghir told the newspaper Al-Ahram.

The new authorities have imposed a state of emergency and nightly curfews, and Mr Mursi and most of the Brotherhood's leaders have been arrested.

More than 900 of its supporters have been killed, many of them when security forces attacked pro-Mursi protest camps in Cairo on 14 August, and at least 2,000 rounded up.

About 100 members of the security forces have also been killed in the political violence.

The Muslim Brotherhood says it is committed to peaceful resistance and has twice in the past week brought thousands onto the streets to denounce what it calls a coup against democracy.

Mr Ibrahim said earlier this week that he had been informed of plans to kill him and that "foreign elements" were involved.

Armed forces chief General Abdel Fattah al-Sisi had supplied him with an armoured car, he said.

There have been conflicting reports about the nature of today's attack.

Security sources contacted said that three bombs planted inside a motorcycle had detonated as Mr Ibrahim's convoy passed by.

State TV reported a bomb had been thrown from a roof.

Mr Ibrahim said the "despicable attempt" on his life had destroyed four of his bodyguards' vehicles.

He said one police officer was in critical condition and that another officer and a small child had lost legs.

"Many of my guards were injured," he said, adding that investigations had shown the blast had been detonated remotely.

State media said 22 people had been wounded in all.

Security forces quickly sealed off the area, where blood and pieces of flesh were scattered on the ground amid the charred wreckage of several cars.

Many Egyptians have expressed support for the crackdown on Mr Mursi’s supporters.

However, the Brotherhood, which came to power in elections following the overthrow of general-turned-president Hosni Mubarak in Febraury 2011, says the allegations of terrorism are a pretext for neutralising it and returning Egypt to the repression of the Mubarak era. 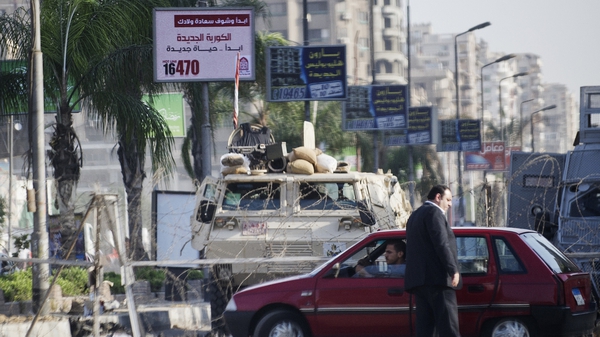