Ulster Bank chief executive Jim Brown has said that 35% of the bank's customers who are in arrears are not engaging with the bank or are not making any payments.

Addressing an Oireachtas Joint Committee on Finance, Public Expenditure and Reform, Mr Brown also said the bank does not have a policy of writing off mortgage debt.

He said that people deliberately deciding not to pay their mortgages is "not fair", adding that the correlation between unemployment and arrears in the Republic broke down in 2011 unlike the situation in Northern Ireland.

The Ulster Bank Chief Executive said the bank's target is to be back in profit in 2014 and he repeated its commitment to its Irish operations.

Mr Brown told the committee that the bank, owned by Royal Bank of Scotland, has exceeded the Central Bank's 20% target on dealing with mortgage arrears and has provided solutions for over 30% of customers in arrears.

Mr Brown said the bank is offering an alternative to split mortgages, where it reduces the repayment on the entire mortgage that has fallen into arrears.

The bank chief said that 72% of Ulster Bank's mortgage book is made up of tracker mortgages, adding that some customers have deposits that exceed their arrears.

Despite last year's technology problems, Ulster Bank said that deposits have risen by 12% year on year.

Bank of Ireland says level of early arrears has reduced

Earlier, Bank of Ireland defended its stance on dealing with mortgage holders in arrears and told the committee that it has to remain profitable.

The bank's split mortgage charges interest on the full mortgage amount, unlike other banks, and Fianna Fáil finance spokesman Michael McGrath said the solution was the "least attractive" of all the lenders.

Bank of Ireland was told to give permanent solutions to 20% of mortgage accounts in arrears, but the bank said today that it had reached 53%. Those figures have not yet been verified by the Central Bank.

BoI Chief Executive Richie Boucher told the committee that the number of customers in "early arrears" reduced in June, July and August.

He also said that nine out of ten of the bank's loans are performing. While the bank's impairment charges remain elevated, they are falling and are expected to reduce further, he added.

The bank said that out of 11,774 customers in default by the end of March, more than half had either entered into a legal resolution process or were in a restructuring process.

The Bank of Ireland boss said the bank can offer solutions to more than 80% of customers in default if they engage with the bank.

The "vast, vast bulk" of Bank of Ireland's mortgages in default were tracker mortgages, the committee also heard today.

Commenting on how the bank dealt with split mortgages for both defaulting tracker and variable mortgage customers - as a possible remedy for default - Mr Boucher said any forbearance was a cost to the bank.

Mr Boucher said that if the bank could not recoup this cost it meant it could not lend. He said the bank dealt with the issue of whether to give a split mortgage on a case-by-case basis.

He said he could not make a promise that it would offer different types of split mortgages to defaulting customers who were on variable as opposed to tracker mortgages.

Members of the committee complained that they did not receive the details in advance and said that Bank of Ireland's figures were not clear. 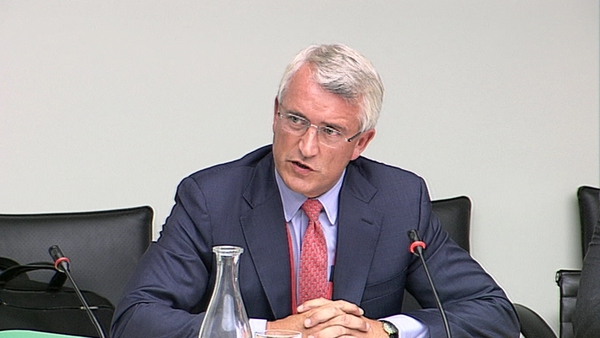