Police have seized a painting of Russia's president and prime minister in women's underwear from a gallery in St Petersburg, saying the satirical display had broken unspecified laws.

The officers also removed a picture of the head of the Russian Orthodox Church, his torso covered in tattoos, and two others poking fun at politicians who have backed legislation banning "gay propaganda", gallery staff said.

The police service said it had taken paintings from the "Museum of Power" gallery - based in two rooms of a flat - after receiving reports they were illegal.

It gave no further detail, but Russia does have a law against insulting authorities - an offence that carries a maximum one-year prison term.

One painting showed President Vladimir Putin wearing a tight-fitting slip and brushing the hair of Prime Minister Dmitry Medvedev, who is wearing knickers and a bra.

St Petersburg politician Vitaly Mironov, whose face was combined with the gay rights movement's rainbow flag in one of the paintings, said the images were inappropriate and "of a distinctly pornographic character".

St Petersburg, which hosts world leaders at a G20 summit next week, was one of the first Russian cities to introduce a law banning the spread of "gay propaganda".

The Russian parliament has also adopted similar legislation, prompting protests from abroad and calls for a boycott of the Winter Olympics, which Russia will host in the Black Sea resort of Sochi in February.

Gallery owner Alexander Donskoy said the officers had also shut down his establishment and gave him no explanation for the removal of paintings from the "Leaders" exhibition.

"This is an (illegal) seizure," he said. "We have been given no formal documents banning us from operating and no receipt confirming our petty cash was seized."

Elsewhere, prosecutors have raided the home of one of the country's leading gay-rights activists.

Authorities searched the Moscow apartment of Nikolai Alexeyev after an MP complained she had been abused on Twitter.

The raid comes as Irish supporters prepare for a rally at the Russian embassy on Saturday week as part of an international day of action against the law. 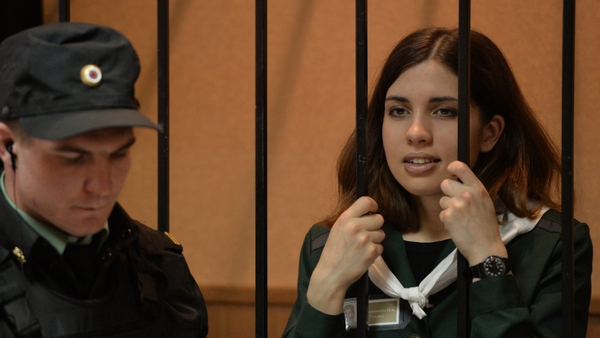