British authorities forced the Guardian newspaper to destroy material leaked by US whistleblower Edward Snowden, its editor has revealed.

Editor Alan Rusbridger described it as a "pointless" move, which would not prevent further reporting on US and British surveillance programmes.

In a column today, Mr Rusbridger said he had received a call from a government official a month ago who told him: "You've had your fun. Now we want the stuff back."

The paper had been threatened with legal action if it did not comply.

They watched as computer hard drives containing material from Mr Snowden was reduced to mangled bits of metal.

Mr Rusbridger said the "bizarre" episode and the detention at London's Heathrow Airport on Sunday of the partner of Guardian journalist Glenn Greenwald showed press freedom was under threat in Britain.

His detention has caused a furore with Brazil, British opposition politicians, human rights lawyers and press freedom watchdogs among those denouncing it.

Mr Greenwald was the first journalist to publish US and British intelligence secrets leaked by Mr Snowden, a former US National Security Agency (NSA) contractor.

Mr Snowden, who has found temporary asylum in Russia, is wanted in the US.

His leaks have revealed details of NSA and GCHQ surveillance of global communications networks.

The US and Britain say their security agencies act within the law and the leaks are a threat to national security.

"If the police believe that an individual is in possession of highly sensitive stolen information that would help terrorism, then they should act and the law provides them with a framework to do that," it said in a statement.

Mr Miranda, who was in transit on his way from Berlin to Rio de Janeiro where he lives with Mr Greenwald, was questioned before being released without charge.

His laptop, mobile phone and memory sticks were taken from him.

He had been ferrying materials obtained from Mr Snowden between Mr Greenwald and Laura Poitras, an independent film-maker based in Berlin who has also published reports based on material from Mr Snowden.

Mr Miranda has launched legal action against the British police and government to question the legal basis of his detention.

He also wants to stop the authorities from viewing, copying or passing on his data, his lawyer Gwendolen Morgan told Reuters.

The White House said yesterday that the US was given a "heads up" ahead of Mr Miranda's detention, but had not requested it.

Mr Rusbridger said the destruction of the computer material was "pointless" as there were other copies of what was lost, and it would not stop the Guardian from pursuing Snowden stories.

"We will continue to do patient, painstaking reporting on the Snowden documents. We just won't do it in London," he said. 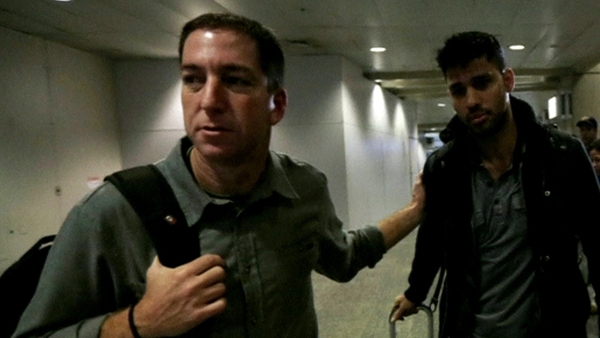