President Robert Mugabe has been declared the winner of Zimbabwe election but Movement for Democratic Change leader Morgan Tsvangirai has said he totally rejects the results.

He said there is evidence available that shows his party actually won the election.

Mr Tsvangirai said MDC will not legitimise government institutions resulting from the election and will take no part in them.

He said MDC will exhaust all legal remedies to challenge the election result.

Earlier, a Zimbabwean election commissioner resigned, citing doubts about the integrity of results showing a big win for President Mugabe's ZANU-PF party but dismissed as a fraud-riddled farce by Mr Tsvangirai.

Mkhululi Nyathi said he quit the nine-member Zimbabwe Electoral Commission (ZEC) over the way it managed the presidential and parliamentary vote held on Wednesday.

His resignation is likely to add to the dispute over the election both inside and outside Zimbabwe.

Africa's oldest leader, Mr Mugabe, 89, has governed the former British colony, then known as Rhodesia, since independence in 1980.

Mr Tsvangirai's MDC said yesterday it could take to the streets to challenge ZANU-PF's claim of a landslide victory, made less than 24 hours after the polls had closed on Wednesday.

ZANU-PF’s two-thirds majority will allow it to make constitutional changes.

Mr Tsvangirai has called on the African Union and the Southern African Development Community (SADC) to investigate the vote, calling it "null and void" and "not credible".

But he faces an uphill struggle to convince the regional bodies, as their observers have already endorsed the election as free and peaceful, while acknowledging minor problems.

Western observers were kept out by Harare, and independent domestic monitors have described the vote as deeply flawed by registration problems that may have disenfranchised up to a million people.

This includes the lack of availability of an updated voters' roll, as required by law.

SADC observers have urged Mr Tsvangirai to accept the result. They expressed relief that the elections have so far avoided the kind of violence that marred a disputed vote in 2008. Then, 200 MDC supporters were killed by ZANU-PF supporters.

Western rejection of the regional African verdict on the election could stir tensions with the continent. But acceptance of Mr Mugabe's victory will be criticised in countries that say he is a despot guilty of rights abuses and ruining the economy.

Britain, a sharp critic of Mr Mugabe in the past, said it was concerned that Zimbabwe had not enacted important electoral reforms before the vote.

The US government, which has imposed sanctions against Mr Mugabe, said "a peaceful and orderly election day does not by itself guarantee a free and fair outcome".

The European Union, which relaxed some sanctions earlier this year after a new Zimbabwe constitution was approved in a referendum, has said it is too early to assess the election's fairness and that it is waiting for the definitive results.

Given the sanctions, the view from the West is key to the future of Zimbabwe's economy, which is still struggling with the aftermath of a decade-long slump and hyperinflation that ended in 2009 when the worthless Zimbabwe dollar was scrapped. 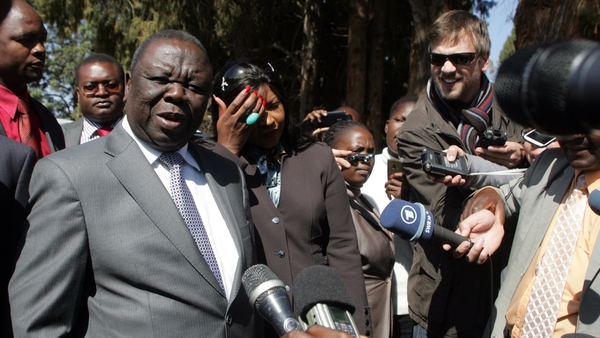