The US State Department has issued a worldwide travel alert, warning of a terrorist threat posed by al Qaeda.

The department says current information suggests al Qaeda and its affiliates continue to plan terrorist attacks which may be focused in August.

A US official said the alert originated with the same information which led to an announcement of the closure of US embassies this Sunday.

The chairman of the House of Representatives Foreign Affairs Committee said al Qaeda appears to be behind the threat.

"It's my understanding that it is al Qaeda linked and that the threat emanates in the Middle East and in Central Asia," Representative Ed Royce said on CNN's New Day programme.

Mr Royce, a Republican, said he and several other lawmakers met two days ago with Vice President Joe Biden on the threat.

"As you know we're going to take whatever steps necessary to protect our personnel overseas. When we do have an indication of a threat, we take that seriously."

The US State Department has confirmed that 21 US embassies and consulates across the Middle East are to close because of unspecified security concerns.

The department said the move is in response to threats to US facilities overseas.

The embassies that are to close include those in Abu Dhabi, Baghdad, Cairo, Tripoli and Kabul.

CBS News reported that the embassy closings were tied to US intelligence about an al Qaeda plot against US diplomatic posts in the Middle East and other Muslim countries.

CBS said the intelligence did not mention a specific location.

Meanwhile, the British Foreign Office said it will close its embassy in Yemen on Sunday and Monday due to "increased security concerns".

"The Department of State has instructed certain US embassies and consulates to remain closed or to suspend operations on Sunday 4 August," State Department spokeswoman Marie Harf told reporters at her daily briefing.

"Security considerations have led us to take this precautionary step."

"The department has been apprised of information that, out of an abundance of caution and care for our employees and others who may be visiting our installations ... indicates we should institute these precautionary steps," Ms Harf said.

"The department, when conditions warrant, takes steps like this to balance our continued operations with security and safety."

The European Union has said it is taking "all necessary precautions" following the announcement.

"We are aware of the move by the US and we are in contact with our US counterparts," European Commission spokesman Alexandre Polack said.

"Delegations of the EU in the affected region are liaising with US embassies."

Another EU official said he was not aware of any plans to close EU delegations on Sunday.

However, a French Foreign Ministry spokesman said his country will close its embassy in Yemen on Sunday over security concerns.

"The decision was made for security reasons because of a threat that was considered elevated," the spokesman said. 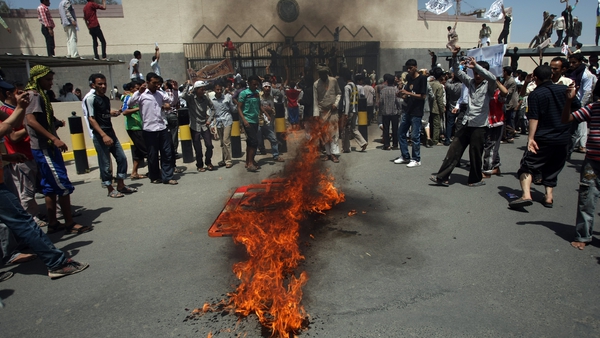 Arrests made in Libya after US embassy attack