The driver of the Santiago de Compostela train crash has so far declined to make a statement to police, according to local media reports.

Officials have yet to name the driver, but it is understood that he is 52-year-old Francisco Jose Garzon.

Mr Garzon is still in hospital where he is being treated for head injuries sustained in the crash.

It is understood he will have to be brought before the judge investigating the case by Sunday at the latest.

The eight-carriage train came off the tracks, hit a wall and caught fire just outside the pilgrimage destination of Santiago de Compostela in northwestern Spain on Wednesday night.

It was one of Europe's worst rail disasters.

State train company Renfe said the driver was a 30-year veteran of the firm with more than a decade of train driving experience.

He had travelled on the line more than 60 times in the past.

Meanwhile, the death toll has been revised downwards to 78.

Commissioner Antonio del Amo said this revision took place as medics had initially wrongly identified some of the victims.

He said 72 bodies have been identified and the other six would require different forms of identification, such as dental records.

The commissioner said this could take several days or a week.

He said that the train's black box had yet to be assessed and would only be opened when the presiding judge ruled it should happen.

Video footage from a security camera showed the train, with 247 people on board, hurtling into a concrete wall at the side of the track as carriages jack-knifed and the engine overturned.

The train entered the bend at 190km/h, according to local media reports. The speed limit on the curve was 80km/h.

Investigators are trying to find out why the train was going so fast and why security devices to keep speed within permitted limits did not slow it down.

The impact was so huge one carriage flew several metres into the air and landed on the other side of a concrete barrier. Bodies were strewn next to the tracks in the aftermath.

Around 94 people were injured, 32 of them, including three children, in a serious condition, the deputy head of the regional government said.

The dead included a US citizen and a Mexican, and at least one British citizen was injured.

Prime Minister Mariano Rajoy, a native of Galicia, visited the accident site and the main hospital on Thursday. He declared three days of official national mourning.

"All of Spain is united in grief with the bereaved families," the king said.

Spain's rail safety record is better than the European average, ranking 18th out of 27 countries in terms of railway deaths per km travelled, the European Railway Agency said. 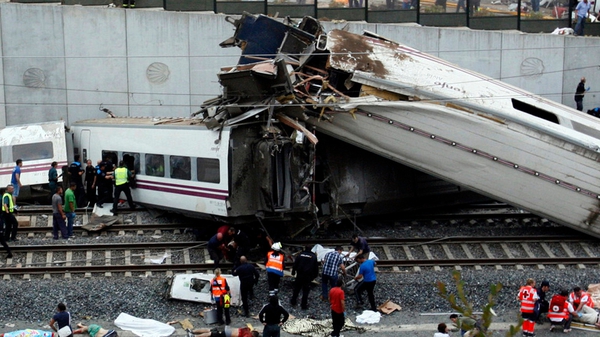 Driver in custody after 80 killed in Spain train crash