An assessment of Clerys department store in Dublin is continuing after its roof was damaged during last night's thunder storm.

The shop is sealed off and the windows are covered with black plastic. Clerys is expected to remain closed over the weekend.

A portion of the roof in the Mater Hospital was also damaged.

A small number of patients in the Mater Hospital were temporarily assigned to other beds.

Dublin Fire Brigade has said a section of Portland Lock along the Royal canal in Dublin collapsed.

Extensive damage was caused to some shops and houses on Main Street in Midleton and in the Ballinacurra area.

DART services are suspended between Bray and Greystones due to lightning damage to overhead lines.

Dublin Bus will accept rail tickets to and from Greystones.

Elsewhere, hundreds of homes in Cork and Wicklow were left without power. 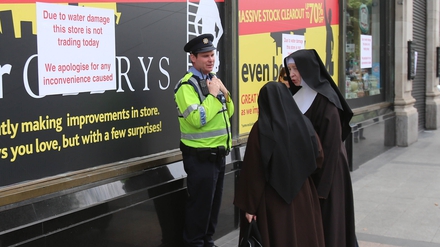