Nine people have been killed in Cairo in clashes between opponents and Islamist supporters of Egypt's deposed President Mohammed Mursi.

The violence broke out before dawn near a Muslim Brotherhood protest at Cairo University, where Mursi supporters have been camped out since the army removed him from power on 3 July.

The Brotherhood described it as an attack on peaceful protesters.

Police sources said hundreds of Mursi supporters clashed with local residents, street vendors and others near the sit-in.

They said gunshots were fired and stones were thrown.

The state-run Al-Ahram newspaper quoted a health ministry official as saying nine people had been killed and 33 wounded, while two wounded in clashes yesterday had died.

At least 15 burned-out cars lay abandoned around the Cairo University area where the clashes took place.

Splattered blood and broken glass disfigured the pavements near the shopping area where a traffic police station was set on fire.

Brotherhood members with sticks guarded the entrance to the protest site after the clashes calmed, while residents stopped cars on the road to Cairo University to check for weapons.

About 100 people have died in violence since the army deposed Mr Mr Mursi and replaced him with an interim administration led by the Adli Mansour, the head of the constitutional court.

The Brotherhood accuses the army of orchestrating a coup and has vowed to keep up its vigil until Mr Mursi, held in an unknown location, is reinstated.

Some residents close to the Brotherhood's main protest area in Nasr City have filed a complaint with the public prosecutor asking for the removal of the protesters.

A security source said the case is expected to be taken to a court and ruled upon soon "to give the army a legal basis to end the protests".

The National Salvation Front, an alliance of liberal and leftist parties that supported Mr Mursi's removal from power, condemned what it described as attacks by Brotherhood supporters on protesters over the past three weeks. 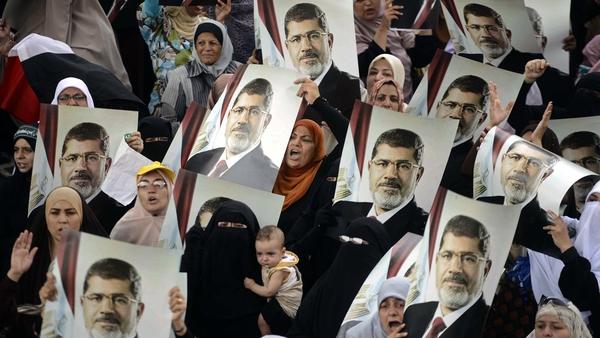