Northern Ireland’s Parades Commission has banned an Orange Order parade from passing a nationalist area in north Belfast this weekend.

500 Orangemen applied to march past the Ardoyne area on Saturday.

Imposing the ban, the commission said that should the march be allowed to pass near nationalist homes there would be an adverse effect on community relations and potential for public disorder.

It said it was not a traditional march, but a parade organised to enable the Orangemen to complete the route they were banned from last Friday.

The commission met Ardoyne community representatives, the SDLP and Sinn Féin during its deliberations and said it was disappointed it had not received any representations from the Orange Order or unionist politicians.

Reacting to the decision, the Orange Order said "the Parades Commission decision to prevent this dignified parade is a further indictment of this already discredited body".

It appealed for calm, saying "violence is counter-productive and serves no purpose only damaging the cause of Orangeism".

Loyalist riots flared in the Woodvale Road area in the north of Belfast last Friday night when Orangemen were prevented from parading past the nearby Ardoyne area on their way home from 12 July commemorations.

Republicans rioted in Ardoyne last summer when Orangemen were permitted to return past the area.

The Orange Order faced stiff criticism for calling for protests ahead of Friday's event. In the wake of the trouble, the order said it was suspending protest action.

In five nights of violence that followed, 71 police officers were injured and more than 60 people were arrested.

Yesterday, the US diplomat tasked with finding a resolution to parading controversies in Northern Ireland arrived in Belfast.

He said the violence that has erupted on the streets is a reminder of the challenges that remain in the region.

As well as the issue of parades, he will also focus on how to deal with the legacy of the Troubles and how to address disputes over flags and symbols.

Referring to the recent rioting, he said consensus could only be reached through dialogue.

Last night, four people were arrested including a 13-year-old boy.

A petrol bomb was thrown at police in the New Lodge Road in north Belfast.

In Co Armagh, police lines were attacked by bottles, bricks and fireworks. 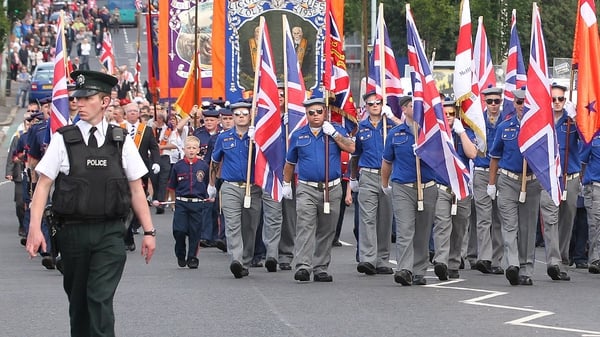