Paschal Donohoe has been appointed Minister of State for European Affairs after Lucinda Creighton voted against the Government in a vote on the abortion legislation.

Ms Creighton has been automatically expelled from the Fine Gael parliamentary party as a result.

The vote on amendment 56, which related to the suicide clause, took place just before 9pm.

She was one of 24 TDs to vote against the amendment.

Speaking shortly after the vote Ms Creighton confirmed she would resign from her post within the Department of the Taoiseach.

She said she was very sad to forfeit her job and lose her position in the Fine Gael parliamentary party, but she knew the consequences when she cast her vote.

"I hold no rancour or bitterness or anything like that," Ms Creighton said.

"I'm very sad, but I genuinely wish Enda Kenny and all the Government the very best."

Ms Creighton, who has been a member of Fine Gael since she was 18, spoke to the Taoiseach after her rebellion. She said she still has "huge admiration" for him.

"I'm very sad. I love my job. I've been very privileged to perform my functions and duties as minister for European affairs for the last two years and more, and it's very sad for me that that is over. But I knew the consequences when I voted," Ms Creighton added.

In a statement announcing the appointment of Mr Donohoe, Mr Kenny said: "I thank Lucinda for her work over the past two and a half years, particularly in the preparation and delivery of the recent, very successful Irish presidency of the Council of the European Union. I wish Lucinda well for the future."

She smiled calmly throughout.

Then after a further vote, Ms Creighton shook hands with Taoiseach Enda Kenny. She then sat on the step beside his seat and spoke to him for about two minutes.

Then as she left the chamber several colleagues approached her including Olivia Mitchell who hugged her and Dr James Reilly who shook her hand. 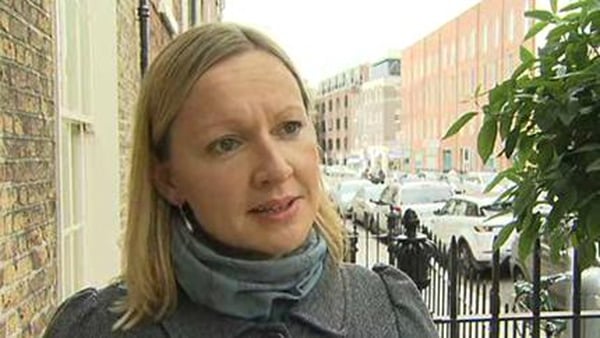