The British and Irish Lions have beaten Australia 41-16 in Sydney.

The victory means the Lions win the three-match series 2-1 - their first tour triumph since 1997.

Jonathan Sexton was one of five try scorers for Warren Gatland's side.

The Lions were quick out of the blocks at the Olympic Stadium with prop Alex Corbisiero crossing for a second minute try and fullback Leigh Halfpenny kicking 12 points to open up a 19-3 lead after 26 minutes.

Australia fought back with James O'Connor scoring just before halftime and inside centre Christian Leali'ifano kicking the home side to within three points at 19-16 with 25 minutes remaining.

But the Lions finally found the attacking rhythm that they lacked in the second test loss. 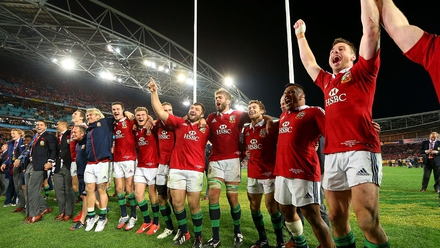 "It's pretty indescribable. There was a lot said about the selection in the week and with big thanks to the fans coming out I think we've proved that despite selection the Northern Hemisphere is doing pretty well," Lions skipper Alun Wyn Jones said in a pitchside interview.

After a tight first test in Brisbane and second in Melbourne, the decider looked like being a rout after 25 minutes with the home side reduced to 14 men, their scrum in disarray and the Lions 19-3 up.

The first eight minutes were disastrous for the Wallabies with scrumhalf Will Genia spilling the kickoff, their pack twice penalised at the scrum and flanker George Smith leaving the pitch after a head clash with Lions hooker Richard Hibbbard.

The fumbled kickoff and a quickly taken freekick had the Lions charging at the home try line inside the first 90 seconds and Corbisiero carried the ball low and hard to reach over and touch down. 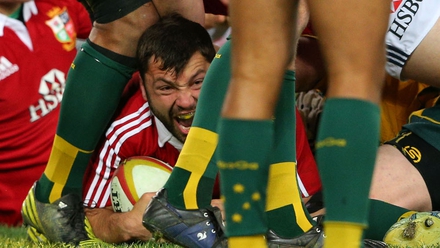 Halfpenny converted and added another penalty from halfway after the Wallabies winger Joe Tomane had been penalised for not releasing to give the tourists a 10-0 lead inside the first 10 minutes.

Smith, returning after four years out of international rugby to win his 111th cap, remarkably re-entered the fray and the Wallabies hit back with a penalty from Christian Leali'ifano two minutes later.

The problems with the pack remained for the home side and referee Romain Poite called a freekick and two penalties against them at the next three scrums, allowing Halfpenny to extend the lead to 13 with two more spot kicks.

Poite ran out of patience at the next scrum and prop Ben Alexander was sent to the sinbin for 10 minutes for collapsing the set-piece, Halfpenny adding three more points from the resulting penalty.

The Wallabies looked down and out two minutes later when winger Israel Folau pulled up with what looked like a hamstring injury to bring Jesse Mogg on for his test debut.

Instead, though, the home side managed to endure the remaining period with just 14 men - Sexton's missed dropped goal the only real threat - and started to put together some backline rhythm.

Mogg's first burst up the middle was stopped by a brilliant tap tackle in open field from lock Geoff Parling but the Wallabies kept coming.

It was from a scrum just before halftime that they finally made the breakthrough, though, O'Connor jinking past Sexton and taking scrumhalf Mike Phillips over the line with him to score. 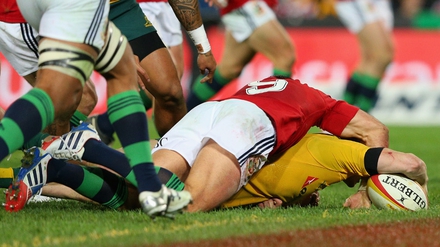 Leali'ifano converted to leave the Lions with just a 19-10 lead at the break and the centre cut six more points out of it with a pair of penalties in the first five minutes after the break.

A huge shove through tighthead Adam Jones saw the Lions regain their dominance at the scrum and the Wallabies crumbled before it, allowing Halfpenny to extend the lead to 21-16 after 51 minutes.

Five minutes later and the Lions attacked up the left flank with Jonathan Davies releasing Halfpenny who got the ball back inside for Sexton to run round and score under the posts.

The slight fullback added the extras for a 29-16 lead and eight minutes later set up the coup de grace, slipping past Genia on the counter-attack to set North on his way for his second try of the series. 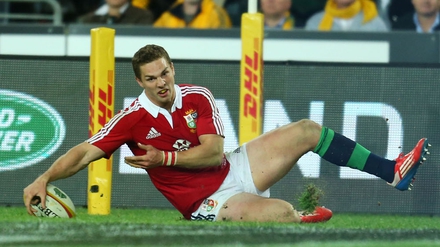 Halfpenny failed with the conversion - his only miss in nine kicks on the night - but it was made academic after 68 minutes when Roberts cut through the Wallabies defence to score the fourth try.

"We had too many errors, mate, early on and we gave them a head start," Wallabies skipper James Horwill said.

"We started the second half like we wanted to start the game and then we let them get away with it and they were too good. You've got to give them credit, they played very well and they were the better team tonight."