The Oireachtas Sub-Committee on has ended its discussions on the committee stage of the Protection of Life During Pregnancy Bill.

The Minister for Health James Reilly said it was one of the longest discussions around a particular piece of legislation because it affected everyone, in one way or another.

Only the minister and the nine members of the Dáil sub-committee on health, chaired by Fine Gael's Jerry Buttimer, were allowed to vote, or to propose amendments in the committee stage.

However, any TD was entitled to attend and to speak, and there was no time limit on contributions.

Some opposition TDs claimed it was "inhumane" to criminalise pregnant women under the legislation.

A vote was called on an amendment in the name of independent TD Seamus Healy, which would allow for terminations in cases of "inevitable miscarriage".

In discussing the proposal Mr Healy said it would address situations like that of the late Savita Halappanavar, where there was no hope of saving the foetus.

However, Mr Reilly said his legal advice was that the amendment would be outside the scope of the ABC judgment, and therefore could open the entire bill to constitutional challenge.

Mr Healy was the only TD who voted in favour of the amendment, with independent Denis Naughten and Sinn Féin's Caoimhghín O Caolain abstaining.

The six other members of the committee and Mr Reilly voted against.

Fine Gael TD Michelle Mulherin spoke about the rights of the unborn.

She said that “if we are really giving any legitimacy or credibility to the life of the unborn baby being vindicated here, that at the very least where a woman does not have a mental illness and she is suicidal, that there should be a cooling off period of a week to ten days from the time she makes the request and medical assessment is conducted”.

She said that this cooling off period could “allow things to settle” and that immediate, life-changing decisions should not be taken quickly.
Mr Reilly said he could not have a cooling-off period on his conscience.

He said: "This is a life-and-death situation. This would be highly prescriptive and this very Oireachtas could be responsible for the death of a woman where the two psychiatrists have certified that the risk is real, substantial and while we are having our cool-off period this lady takes her life.

"That's not something I am prepared to have on my conscience, that is not something that we can prescribe for in law. It is overly prescriptive. I accept that there is nothing but good intention behind it but the reality is that it is not possible."

The Committee approved Section Nine, allowing terminations where there is a threat of suicide, by eight votes to two.

The legislation moves to report stage next week.

Meanwhile, Terence Flanagan, Peter Mathews, Billy Timmins and Brian Walsh, the four Fine Gael TDs who voted against the bill, have automatically been expelled from the parliamentary party.

They will now be removed from the Oireachtas committees on which they serve.

Taoiseach Enda Kenny said he does not expect that Fine Gael TDs who vote against the abortion legislation can be candidates for the party in the next general election.

Speaking in Berlin he said, “They know the consequences of this, and therefore I don't expect that they can be candidates for the Fine Gael party in the next general election."

The Taoiseach said it was regrettable to lose any colleague but pointed out the legislation was passed by a very substantial majority in the Dáil at second stage.

This, he said, reflected the strength of public opinion on the issue.
Billy Timmins said Fine Gael was trying to put "frighteners" on others who may have concerns about the bill by taking sanctions against those who voted against it yesterday.

Mr Timmins said it was "ironic" that he had been "turfed out" of the Fine Gael parliamentary party, considering that the issue of abortion was not contained in the Programme for Government.

Speaking on RTÉ's Today with Myles Dungan, Mr Mathews and Mr Walsh said they had not strayed from their position on abortion, but that the party had.

Mr Mathews said when he signed the Fine Gael Party pledge, he made clear that it was his intractable position that life begins at conception and ends in natural death.

Mr Mathews said that he was assured his position was in line with the party's.

The Dublin South TD said that he had not voted against the Government, but against the bill, which he described as fundamentally unsound as a result of Section 9, which deals with the threat of suicide.

Minister for Children and Youth Affairs Frances Fitzgerald said she would not "hold out hope" that the four TDs would be re-admitted to the party before the next general election.

She said the Government was trying to provide "the legislative framework" for what was already set down in the courts in terms of abortion.

Sinn Féin's Peader Tóibín also voted against party instructions.
Northern Ireland Deputy First Minister Martin McGuinness has said that he would have voted for a Protection of Life in Pregnancy Bill containing a suicide clause.

Speaking after addressing the Irish Congress of Trade Unions conference in Belfast, he said being in Government was about doing everything to protect the life of the mother.

Asked about what disciplinary measures Mr Tóibín should face for voting against the bill, he said that would be a matter for the Ard Chomhairle of Sinn Féin.

Speaking on RTÉ’s Morning Ireland, Ms McDonald said the outcome is a matter of party discipline and is not confined to the parliamentary party.

Ms McDonald said Sinn Féin will be seeking a number of amendments to the bill as it goes to committee stage but said that overall the party is happy with the shape of the legislation, which she said is long overdue.

She said the main focus is on providing clarity for women and medics.

Fianna Fáil TD Willie O'Dea has said he would be willing to reconsider his position on the abortion legislation if a review clause was added. 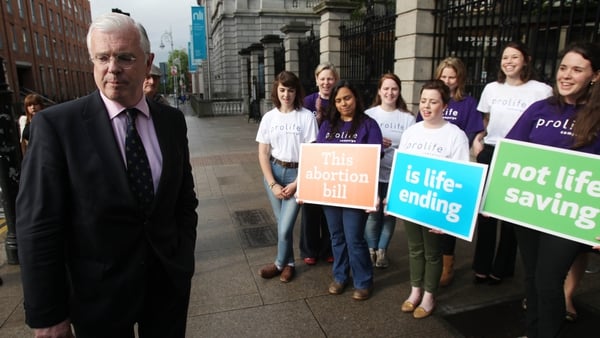