Six people have been killed in an attack on a foreign logistics and supply company in Afghanistan.

The Taliban claimed responsibility for the attack in an area in the north of the capital Kabul, which is used by a number of foreign companies supplying NATO forces.

Two lorry drivers working for the company and four Nepalese guards were killed in the attack.

Three other employees were wounded.

The attack began when an insurgent drove an explosives-laden truck into a vehicle bay in the compound north of Kabul airport, detonating an explosion that left a crater six metres deep and about 15 metres wide.

Three other attackers then engaged in a gunfight with Afghan security forces for up to an hour before they were killed.

Three vests packed with explosives were recovered from the scene.

It was the latest in a series of high-profile assaults by insurgents in Kabul.

It came a week after Taliban fighters managed to penetrate the most secure area of Kabul and attack buildings in an area that includes the palace of Afghan President Hamid Karzai.

Afghanistan's main intelligence agency, the National Directorate of Security said it had arrested a man in Kabul carrying a suicide vest and an automatic rifle who had planned to attack one of their compounds. 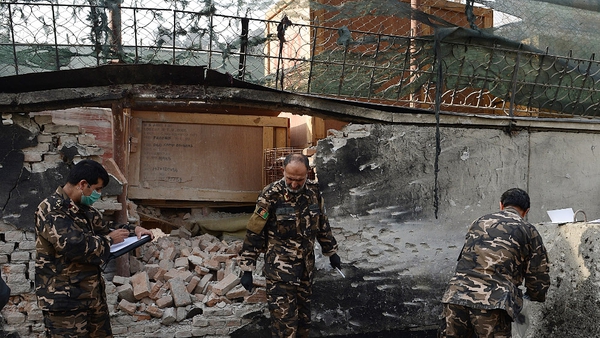