A new commemorative torch in Wexford lit from the Eternal Flame at John F Kennedy's grave has briefly gone out, just four days after it was ignited in New Ross by his daughter Caroline.

New Ross town manager Éamonn Hore said the torch has been relit from spare flame sources - taken from Arlington Cemetery in the US as part of commemorations to remember President Kennedy's visit 50 years ago.

The torch’s design and location in an open exposed area was "unique" and technically challenging, Mr Hore said.

A build-up of soot had caused the flame to cut out.

"It was out for only a few minutes but the system is fully monitored and we knew what was happening," he said.

The flame burner, which is designed by English firm Bullfinch which also engineered the 2012 London Olympics torch system was tested extensively in wind tunnels before installation.

"It’s difficult however to replicate in a wind tunnel what is to happen in reality," said Mr Hore.

"We anticipated teething problems for the first month and that tweaking might be needed. Because it’s completely new, you don’t know exactly what’s going to happen,” he added.

The flame is extensively alarmed and monitored after it was lit at the weekend in a ceremony involving members of the Kennedy family and dignitaries led by Taoiseach Enda Kenny.

These were flown to Ireland for the 50th anniversary celebrations in special containers identical to those used to carry the Olympic torch from Athens.

Mr Hore said there was no embarrassment over the incident and that the flame at Arlington also goes out from time to time for technical reasons.

He said the new flame is already igniting tourist interest, with hundreds of visitors coming to see it each day. 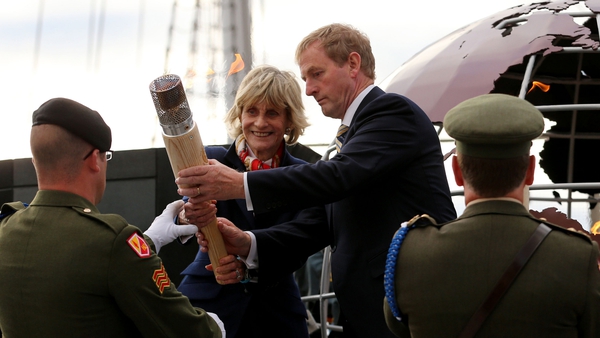