Seismologists have said that a small earthquake of magnitude 2.8 was recorded in the Irish Sea last night.

The earthquake occurred at a depth of 12km at around 11:30pm, close to where another magnitude 3.8 earthquake struck on the morning of 29 May.

The Irish National Seismic Network (INSN) said the epicentre was around 2km off the Welsh coast and 97km southeast of Dublin.

Dr Yochai Ben-Horin of the Dublin Institute for Advanced Studies (DIAS), which runs the INSN, said the tremor was felt across North Wales.

There have been no reports from the public in Ireland, but anyone who felt the tremor is asked to submit a report online.

"We have not yet received any felt reports from people living on Ireland's east coast but the quake was recorded by our network of seismic stations throughout Ireland," he added.

There has been an increase in seismic activity in the area in recent months and further minor earthquakes are likely.

However, at present there is no indication that a larger earthquake is to be expected. 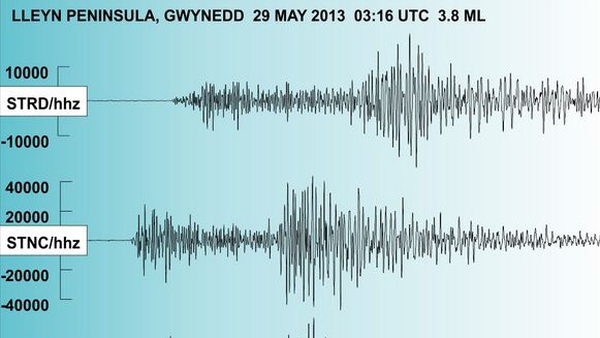