Kevin Rudd has been sworn in as prime minister of Australia after staging a dramatic comeback in a snap leadership ballot.

Almost three years to the day since he was ousted from the job by Julia Gillard, he seized the leadership back by winning a ballot by 57 votes to 45.

Mr Rudd said his Labor party can now take the fight to the opposition in the next election and he urged young Australians to get interested in politics again.

Mr Rudd, a Mandarin-speaking former diplomat, forced Ms Gillard out in nearly the same way she ousted him in 2010.

In a brief statement to parliament two hours after he was sworn in as national leader, Mr Rudd praised Ms Gillard's "major reforms" on issues such as industrial law and school literacy testing, as well as "her great work as a standard bearer for women".

Many took the fact that he never posed for a Parliament House portrait, as other former prime ministers had done, as a sign that he never gave up on returning.

"Let us try, just try to be a little kinder and gentler with each other in the further deliberations of this parliament."

Markets reacted calmly to the change in leadership, which is not expected to affect Australia's economy or its strong dollar.

Amid global financial instability and after years of growth fuelled largely by a mining boom, the nation's economy has cooled. 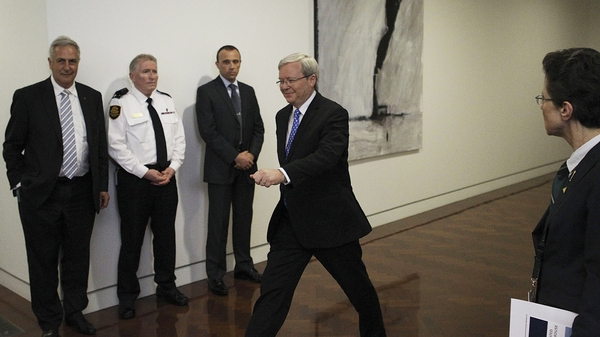