US President Barack Obama has announced a package of measures aimed at curbing climate change.

The package includes the first ever federal regulations on carbon dioxide emissions from power stations in the US and plans to boost the production of renewable energy.

In an attempt to by-pass his opponents in Congress, Mr Obama said he would use his executive powers to enforce the new emissions rules.

He ordered his administration to end the practice of coal-fired power plants dumping unlimited carbon dioxide emissions into the atmosphere, moving to deliver on one of his major goals in office.

At a speech at Georgetown University in Washington DC, he announced the first-ever federal regulations on heat-trapping gases emitted by new and existing power plants.

The president also said an oil pipeline project from Canadian tar sands to Texas refineries should only be approved if it does not "significantly exacerbate" carbon pollution.

"As a president, as a father and as an American, I'm here to say we need to act," Mr Obama said.

He mocked those who deny that humans are contributing to the warming of the planet, adding that he "doesn't have much patience" for anybody who refuses to acknowledge the problem.

"We don't have time for a meeting of the flat-earth society," he said.

Environmental activists have demanded that his administration not approve the Keystone XL pipeline, while Canada's leaders have pushed for its approval.

The announcement was the first public confirmation that Mr Obama plans to extend proposed carbon emissions controls on new power plants to existing ones.

He has pledged to work with major polluting countries such as China and India to curb emissions, building on an agreement struck recently with China's leader to phase out hydrofluorocarbons, potent greenhouse gases used in air conditioners and refrigerators.

He has also called for an end to US support for public financing for new coal-fired plants overseas, with exemptions in the poorest nations as long as the cleanest technology available in those countries is being used. 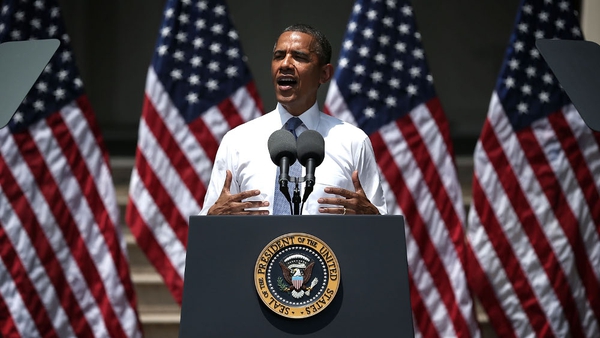