The Government has published its proposed amendment to the Constitution to abolish the Seanad.

If passed by the people in a referendum, the Seanad would cease to exist from the time of the next General Election.

The Bill says that no new Seanad election will be held when the current Dáil is dissolved.

The Seanad would be abolished from midnight of the day before the new Dáil meets.

He said Ireland had too many politicians for its size and the Government had to question the need for a second chamber.

The Taoiseach said the Seanad did nothing to challenge the excess of the Celtic Tiger and was outmoded.

Mr Kenny said all the Scandinavian countries had abolished their second chambers.

He said other systems, such as New Zealand, had shown it is perfectly possible to introduce checks and balances in a single-chamber parliament.

He said €20m per year would be saved.

Mr Kenny said measures were to be introduced to improve the working of the Dáil to ensure proper accountability and oversight.

Each piece of legislation would go first as Heads of a Bill for discussion at the relevant committee.

Four-day sittings of the Dáil would become the norm each week.

There would be an extra stage in the legislative process, an "enactment stage", where the Bill would go back to committee for final consideration.

There will be 14 Dáil committees, each with 12 members, and to strengthen their independence, Committee Chairs will be selected by the d'Hondt system.

There will also be greater opportunities for TDs to initiate legislation themselves.

Among the changes to the Constitution are the replacement of the Cathaoirleach of the Seanad by the Leas Ceann Comhairle of the Dáil on the Council of State and the Presidential Commission.

The impeachment of a President will require a four-fifths majority of TDs, rather than a two-thirds majority of Oireachtas members under the Constitution.

The impeachment of a judge or the Comptroller and Auditor General will require a two-thirds majority of TDs, rather than a simple majority as at present.

The Taoiseach and Tánaiste Eamon Gilmore have both said they expect all their TDs and Senators to support the referendum, both during its passage through the Oireachtas and in the subsequent campaign.

Labour Chief Whip Emmet Stagg said that the party has agreed to vote under whip in the Dáil to pass legislation to allow the referendum go ahead. But he said members are free to vote either way in the referendum itself.

Minister for Agriculture, Food and the Marine Simon Coveney said the government wants to abolish the Seanad because it's "the right thing to do".

However, the Democracy Matters group has described the plans as "constitutional vandalism".

Senator Feargal Quinn said: "This Government was elected on a promise of real and radical political reform, instead what we are seeing today is yet more of the same, deeply cynical and short-sighted proposals dressed up as reform.

"These proposals are anything but reforming, they will damage our democracy, vandalise our constitution, and concentrate more power in the hands of Cabinet members."

Senator Katherine Zappone said democracy should be transparent and have greater participation from minority groups.

She said: "This is not political reform, it solves none of the problems of the broken system which gave us our current crisis, but instead makes our broken system, more centralised, more whipped and more controlled by Government and less accountable."

Fianna Fáil has said it will campaign against the abolition of the Seanad.

The party favours reform of the upper chamber and Dara Calleary said abolishing the Seanad would lead to "less accountability and less transparency".

He said: "Simple abolition without even allowing the opportunity to discuss considering reform is foolhardy."

Elsewhere, President Michael D Higgins has said it is a matter for the people to decide the future of the Seanad.

Speaking in Croatia, where he is on a State visit, the President said it is up to the Government to choose what to put to the people.

He will treat the Bill as he treats all legislation when it comes before him and it would not be appropriate to comment further, he said. 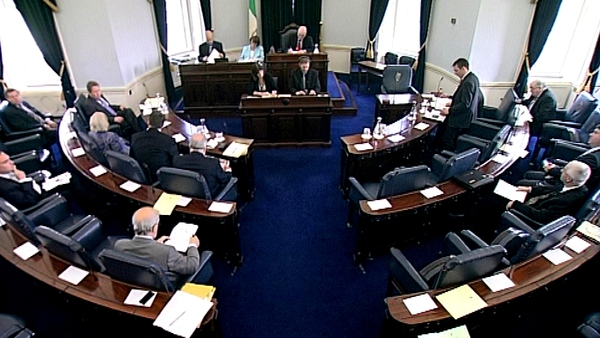