Germany has dispatched thousands of soldiers to help cities and towns cope with flooding from the rain-soaked Danube and other southern rivers.

Parts of the city's historic centre are under several feet of water.

Ms Merkel has pledged at least €100m in immediate aid for flood-hit areas.

The death toll in the flooding that has hit central Europe has risen to at least 11, including seven in the neighbouring Czech Republic.

Another nine people have been reported missing in the floods that have also swept through Switzerland and Austria.

Many villages north of the Austrian capital, Vienna, have been flooded, and firefighters are using boats to get around.

Wild animals have had to be rescued from the floodwaters and authorities are expecting water levels to rise another 30cm.

That is close to the breaking point of current flood barriers.

In Lower Silesia province, the situation is stabilising, but in many places water levels are still at dangerous levels.

The rain in Czech Republic capital Prague has halted, but the Vltava river that runs through the city and flows into the Elbe is still raging, with currents and water levels far exceeding the norm.

The famous Charles Bridge has been closed as a precaution.

Authorities said the level of the Vltava has now begun to drop, but excess water was expected to hit the Elba river, into which it flows downstream.

This year's spike in water levels has been far less than in 2002 so far, but still forced the Prague Zoo to evacuate animals after the lower side of the park was submerged.

Peak floodwaters flowing out of the Czech Republic are also expected to hit Dresden, capital of the German province of Saxony, along the Elbe in three to four days. 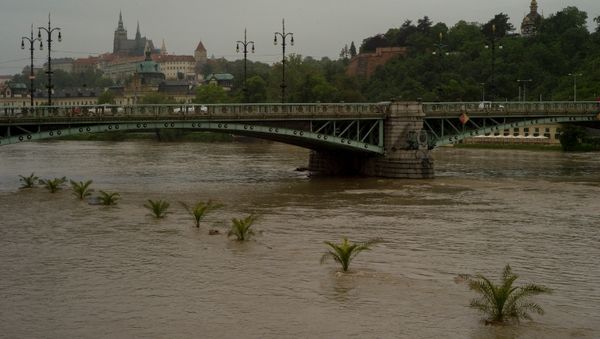