Turkey's deputy prime minister has offered an apology for a violent crackdown on an environmental protest in an attempt to appease days of anti-government rallies across the country.

Bulent Arinc, who is standing in for Prime Minister Recep Tayyip Erdogan while he is out of the country, said the crackdown was "wrong".

He said: "The display of excessive use of force against the first demonstrators who started this protest with the aim of protecting the environment was wrong.

"It was unfair, and I apologise to my countrymen. I don't think we need to apologise to those vandalising the streets and to those preventing the freedom of people on the street."

It was unclear, however, whether Mr Arinc was giving the government line.

As he spoke, hundreds of riot police were deployed around the prime minister's office in the capital Ankara.

Mr Erdogan, who is visiting Morocco, Algeria and Tunisia, has undermined statements by his ministers in the past.

He has previously called protesters "looters" and dismissed the protest as acts by fringe extremists.

Thousands have joined anti-government rallies across Turkey since Friday, when police launched a pre-dawn raid against a peaceful sit-in protesting plans to uproot trees in Istanbul's Gezi Park.

Since then, the demonstrations by mostly secular-minded Turks have spiralled into Turkey's biggest anti-government disturbances in years, and have spread to many of the biggest cities.

Protests were directed at what critics say is Mr Erdogan's aggressive and authoritarian style of governance.

Meanwhile, more than 240,000 public sector workers in Turkey are staging a 36-hour strike.

The strike is in response to what union leaders have called "state terror" against demonstrators.

The unrest delivered a blow to Turkish financial markets that have thrived under Mr Erdogan.

Shares fell more than 10% and the lira dropped to 16-month lows today. 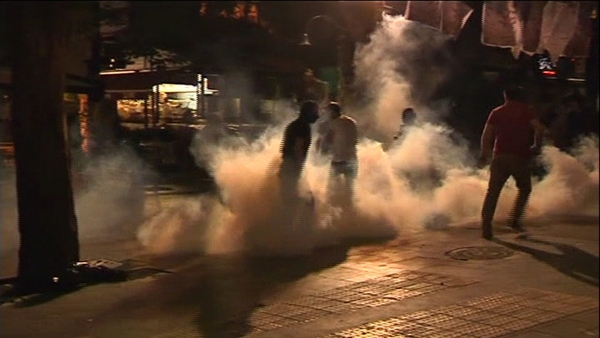