The Cabinet has given the go-ahead for the drafting of legislation to force tobacco companies to introduce plain cigarette packaging, to help reduce the level of smoking.

The issue was brought to Cabinet today by Minister for Health James Reilly.

Speaking on RTÉ’s News at One, Minister Reilly said he hopes to have plain packaging legislation for cigarette packets enacted by early 2014.

Health agencies have welcomed the move, while some retailers say it will do nothing but make life easier for the illegal cigarette trade.

A number of countries are considering similar moves, but Australia is the only country that has introduced a similar law.

Plain, or generic packaging, would require tobacco companies to remove all branding.

It would only allow a brand name with a specific typeface and limited size on the pack, as well as health warnings and other required information.

The groups quoted statistics that say over 5,000 people die from tobacco-related illnesses in Ireland every year.

The Irish Cancer Society and the Irish Heart Foundation say they believe that children will be less likely to start smoking.

They said that this would be due to the new legislation and they urged the Government to ensure that its introduction is not delayed.

ASH Ireland welcomed the decision, saying it believes plain packaging is a vitally important tool in tackling what it described as the slick marketing of the tobacco industry.

However, there has been some criticism of the move.

The National Federation of Retail Newsagents in Ireland says that  it supports the Government in its efforts to curtail the use of tobacco.

It claims however, that the only people who will benefit from the minister's announcement will be smugglers and criminals.

A spokesperson for the Irish Tobacco Manufacturers' Advisory Committee said: "Ireland is very much in the grip of the illegal tobacco trade,"

The group said:" this proposed legislation will only make it easier for criminals to reproduce counterfeit packs, saving them time and resources." 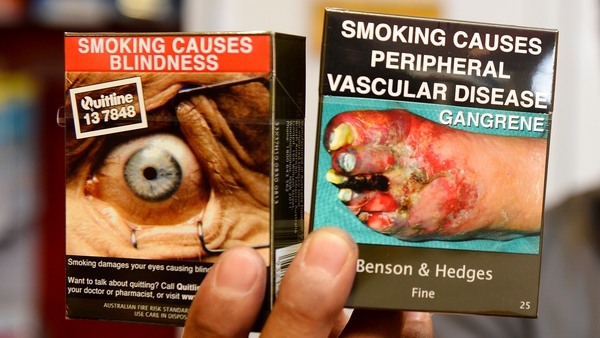 Britain may bring in plain packaging for cigarettes