Minister for Justice, Alan Shatter, has defended his record in office during a Dáil debate on a motion of no confidence in him, tabled by Fianna Fáil.

The motion centres on the penalty points and Garda discretion controversy and will be voted on tomorrow night.

Mr Shatter denied any wrongdoing at a garda checkpoint four or five years ago.

He said he had not been able to complete a breathalyser test due to asthma.

Mr Collins claims he used information that was not in the public domain during an RTÉ Prime Time debate earlier this month.

Mr Shatter said his mentioning of the incident involving the Independent TD Mick Wallace was a mistake.

He apologised and said he would not do it again.

Minister Alan Shatter told the Dáil the motion was particularly galling given that one of his biggest jobs on entering office was to reverse Fianna Fáil’s cuts to justice and defence funding.

Addressing claims made by Mattie McGrath TD last Thursday he told the Dáil, “While I can be accused of being a workaholic, I can not be accused of abusing alcohol.”

Earlier, the Taoiseach reiterated the Government's "full confidence" in Mr Shatter, saying he has clarified all the matters raised regarding an incident at a Garda checkpoint four or five years ago.

Mr Shatter said: "The Commissioner has confirmed that he caused enquiries to be made by local garda management as to whether or not a report of the incident was made at the time.

Tánaiste Eamon Gilmore told RTÉ's Morning Ireland he is satisfied that Mr Shatter has given a full account of the checkpoint incident.

While Minister for Health James Reilly, said he believes that the Minister for Justice has been very forthcoming about the incident.

Speaking to RTÉ News, Mr Reilly said the level of attention being given to the matter was "somewhat overstated".

The minister said that it was perhaps an indication that there was "no steam left" in the story that a motion of no confidence in Minister Shatter has been brought forward to Fianna Fáil.

However, Mattie McGrath has said he does not believe Mr Shatter's assertion that no record exists of a garda checkpoint incident involving the minister.

Speaking to RTÉ's Today with Pat Kenny, the South Tipperary-West Waterford TD said the Garda Ombudsman should investigate the incident.

He also insisted that the minister committed an offence in law by failing to provide a specimen to gardaí when required. 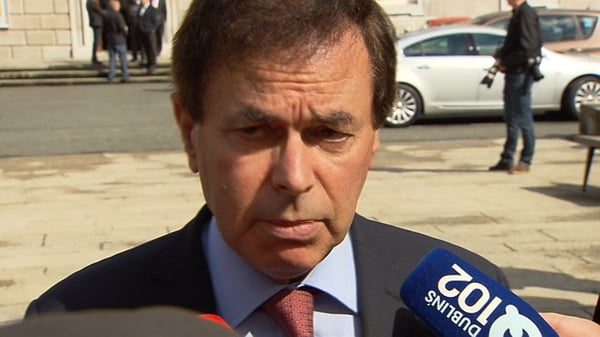