The Central Bank was warned about potential design and copyright problems before it issued the flawed €10 James Joyce commemorative silver coin last month.

Department of Finance officials alerted the Central Bank on at least two occasions about the possibility of difficulties with the James Joyce estate over copyright and design.

The details are contained in documents obtained by RTÉ News under Freedom of Information.

The coin sold out within two days of being issued on 11 April, despite carrying on its front an error in a quotation from Joyce's most famous work, Ulysses, alongside an image of the author that was not approved by his estate.

Joyce's grandson, Stephen Joyce, described the coin as "one of the greatest insults to the Joyce family that has ever been perpetrated in Ireland".

The documents released to RTÉ News show that the Central Bank Numismatic Advisory Committee originally wanted to mint a collectors' coin this year commemorating Jonathan Swift, the author of Gulliver's Travels, as part of a Europa series on prominent European writers.

However, the Department of Finance urged that Joyce might be a more suitable choice, with more international appeal. It also noted that "there may be problems with copyright in the case of a Joyce coin", according to the minutes of a meeting between officials from the department and the bank last May.

An internal submission to Minister for Finance Michael Noonan a month later noted that the bank had suggested a number of other prominent Irish writers as options, including William Butler Yeats, Seán O'Casey, Bram Stoker and Maria Edgeworth, as well as Swift.

The submission added that the department was instead recommending "James Joyce as the first option with William Butler Yeats as the second option in the event that difficulties are encountered with the Joyce estate in terms of the coin design".

The submission also told the minister that James Joyce had featured on an old Irish £10 note and it added: "We understand that the Central Bank encountered some difficulty in dealing with the Joyce estate at the time".

Kieran McNamee of the department’s Financial Services Division subsequently wrote to the head of the Currency Issue Department of the Central Bank, Daragh Cronin, to say that Minister Noonan had agreed in principle that the bank should consider James Joyce as the first choice for the 2013 Europa silver coin, with William Butler Yeats as a second option "in the event that difficulties are encountered with the Joyce estate in terms of the coin design".

He added: "It is noted that copyright on Joyce's works expired on 1 January 2012. Does this have any relevance to the design?"

The bank's reply has not been released as the Central Bank is not subject to the Freedom of Information Acts.

The error on the coin, which was first reported by RTÉ News on the morning it was due to go on sale, made headlines around the world and forced the Central Bank to compose a note of clarification for insertion in the coin's commemorative case.

Head of the Central Bank's Currency Issue Division Lucy O'Donoghue sent an e-mail to the department early on the afternoon the coin went on sale to advise that a correction note was being inserted.

She said that sales were very high, with 70% of the 10,000 coins minted already sold, and that media attention was also high.

She added that the bank was "researching" the artist's source and that the artist "appears to think it may be an error".

The correction note inserted into the case said that the Central Bank acknowledged that the text on the coin did not correspond to the precise text as it appears in Ulysses, with an additional word, "that", being inserted into the second sentence at the beginning of the third episode, or chapter, of the work.

It added that, "while the error was regretted, it should be noted that the coin was an artistic representation of the author and text and not intended as a literal representation".

Aside from the textual error, the image of James Joyce on the front of the coin also displeased his grandson, Stephen, who manages the author's estate.

He told the Irish Times that the image was "the most unlikely likeness of Joyce ever produced".

He also complained that the errors would have been avoided if the Central Bank had consulted him properly. 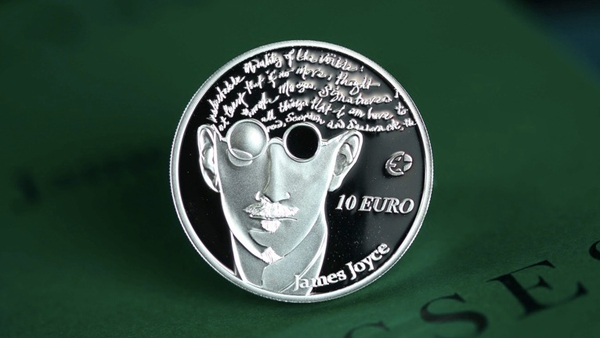