An 80-year-old Japanese mountain climber who has had four heart operations has become the oldest person to conquer Mount Everest.

"This is the greatest feeling in the world," Yuichiro Miura told family members and supporters gathered in Tokyo, speaking from the summit by satellite phone.

"I never thought I'd get to the summit of Everest at the age of 80. It was the best feeling to get here, but now I'm completely exhausted."

Mr Miura broke the record held by Nepal's Min Bahadur Sherchan, who conquered the world's highest mountain at the age of 76 in 2008.

The Japanese octogenarian adventurer had already climbed Everest twice since 2003.

"The record is not so important to me," Mr Miura said before setting off. "It is important to get to the top."

He was accompanied by three other Japanese, including his son, and six Nepali Sherpas.

His record however is already at risk. Nepal's Min Bahadur Sherchan, now 81, plans to start climbing the peak this weekend.

Mr Miura took the standard southeast ridge route pioneered by Sir Edmund Hillary and Tenzing Norgay 60 years ago, reaching the 8,848m peak at about 9am (4.15am Irish time).

He spent the night at 8,500m at the Balcony in the so-called death zone before launching his final ascent.

Most climbers use the 8,000m South Col as a resting place before the summit climb.

His progress has been watched closely in Japan.

Daily broadcasts of phone calls and photographs beamed home from their ascent have included the climbing party drinking green Japanese tea and eating sushi in their tent high on the mountain.

A famed adventurer, Mr Miura skied down Everest from the South Col in 1970, a feat that became the subject of a documentary.

He has since skied down the highest mountains on each of the seven continents, following the tradition of his late father Keizo, who skied down Europe's Mont Blanc at the age of 99.

The record-breaking octogenarian trained for the Everest climb by hiking in Tokyo with weighted packs and working out on a treadmill in a special low-oxygen room in his home.

Nearly 4,000 climbers have reached the Everest summit since Mr Hillary and Mr Norgay's pioneering May 1953 climb, while 240 have lost their lives on its slopes.

Belfast's Dawson Stelfox became the first person from Ireland to reach the top in 1993.

Mr Miura is not the first record-setter on Everest this climbing season.

Sudarshan Gautam, a 30-year-old Nepali-born Canadian who lost both arms in an accident, became the first double amputee to reach the summit. 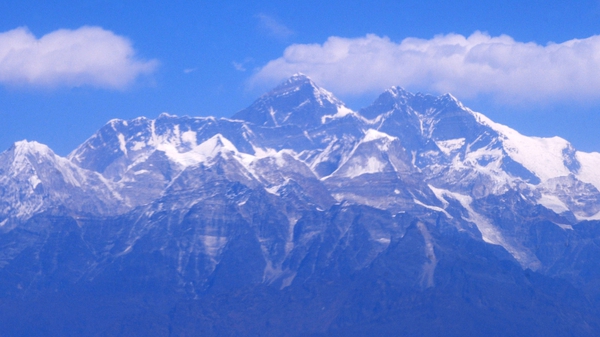