Unions are to consider a new set of draft proposals reached on public service pay following lengthy talks at the Labour Relations Commission.

The proposals were reached after more than 22 hours of talks, which began at 10am yesterday, and they will now be considered by union members.

Minister for Public Expenditure Brendan Howlin said he would not comment on the details of the legislation, which was passed by Cabinet this morning and will be published on Thursday.

He said he now wanted to give the space and time for unions to consider the proposals.

Mr Howlin said public servants had already contributed to recovery and, while this is another ask, it is the last ask.

"It is a building process to get to today," the minister said.

"I'm glad that the structure is there. I'm not taking anything for granted with regard to the ballot that's still out there. But I'm asking public servants to walk with us on this final leg of the path. I think it's really important."

Minister Howlin said he hoped if there was agreement, the Government could give the same guarantees about job security, but that was contingent on unions signing up to the deal.

He said: "If these proposals are accepted it will be possible to achieve the required savings and major increases in public service productivity.

"The essential elements and protection of the Croke Park Agreement will remain in place. That will benefit both people working in the public service and all of us who rely on public services."

In return for a longer working week, the Health Service Executive will restore Sunday premium pay for nurses to double-time.

The deal provides for graduate nurses to start working on 85% of current pay in year one, rising to 90% in year two and 100% in year three.

The agreement also contains a commitment from the HSE not to interfere with nurses' family-friendly working arrangements.

General Secretary of the Irish Nurses and Midwives organisation Liam Doran said he was mainly pleased with the revised deal.

"The main concessions [we won] -are double time and premium pay. Double time on Sundays and public holidays- that was a permanent pay cut to over 7.75% of our members- that has been restored," he said.

However, Mr Doran said nurses would find it difficult to accept a new 39-hour working week.

"I'm not going to hide the fact that the reversion on the working week is a significant backward step as far as we are concerned," he said.

She said the deal will achieve savings by substantive reforms rather than "stark insensitive cuts".

"I do believe the reform piece is quite substantive in it. I think that's very positive in terms of delivery of public services into the future," she said.

Proposals have also been issued to the teacher unions, which they will bring back to their executives.

The Irish National Teachers' Organisation, the Association of Secondary Teachers, Ireland and the Teachers' Union of Ireland have already balloted for industrial action if pay cuts are imposed without consent.

It is understood that most unions were shown the legislation that the Government intends to enact if a deal is not agreed. 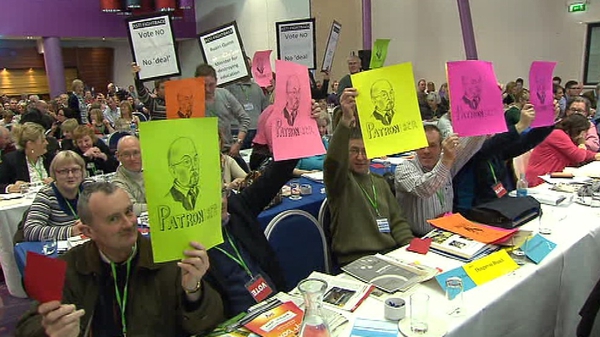