The Oireachtas Health Committee has completed today's hearings on the Heads of Protection of Life during Pregnancy Bill.

During the final session this evening, members heard from a cardiologist, a medical oncologist and the Chairman of the Mental Health Commission.

It was suggested to the committee that the Heads of the Bill should include two medical practitioners in the certification process should the situation arise where the life of a mother with cancer is at risk.

She said that for oncologists who have not come across the situation before the presence of a second oncologist would be wise.

When asked if he believed the legislation was necessary, Mater consultant cardiologist Dr Kevin Walsh said he believed it would save women's lives.

Mental Health Commission Chairman John Saunders said there was an issue around children in the Heads of the Hill.

He pointed out that there was nothing in the act regarding women below the age of consent who get pregnant.

Earlier, President of the College of Psychiatrists of Ireland Dr Anthony McCarthy said that any pregnant women with suicidal ideation should have access to proper services and there is a lack of such services.

Suicide in pregnancy is real, he said, adding that the Bill is about legislating for the very small but real possibility that sometimes a woman's life can be saved by termination of her pregnancy.

Consultant perinatal psychiatrist Dr Joanne Fenton said that suicide is a real risk in individuals who have a mental illness.

While she said she did not believe that termination is a treatment for mental illness, Ms Fenton said she could not say there will never be a situation where a woman is in such a state of distress and turmoil that for her termination of pregnancy is a life-saving option.

The appeals process included as part of the legislation should be shortened, she said, as the longer the woman is in distress, the more at risk she is of suicide.

Consultant child and adolescent psychiatrist Dr Maeve Doyle told committee members that the Heads of Bill do not define the word "child" and this is important.

She said the law has been interpreted that those under 18 cannot legally consent to psychiatric assessment without parental permission.

Dr Doyle said that the likelihood of parents of teenage girls seeking advice from psychiatrists regarding terminations is rare.

However, she said the HSE may well seek their advice when acting as guardians for teenagers, which is where this will generally apply.

Consultant psychiatrist from the College of Psychiatrists of Ireland Dr Anne Jeffers said the legislation is extremely restrictive and will not apply to the vast majority of women.

The wording of the legislation would restrict terminations for suicide to extremely rare circumstances, Ms Jeffers said.

She said that Ireland needs to ask what sort of a State it is that it would allow a suicidal woman to travel abroad for a termination.

Consultant perinatal psychiatrist Dr John Sheehan said that while at face value the legislation seemed restrictive, it was not possible to say how it would operate in practice.

In other jurisdictions schemes that had seemed restrictive had turned out not to be, he told the committee.

Dr Sheehan said there were no figures on suicidal ideation in pregnancy so it was not possible to say how many women would avail of the legislation.

Cork University Hospital Clinical Director Dr Eamonn Moloney said the requirement that two psychiatrists and an obstetrician/gynaecologist assess a woman's risk of death by suicide is excessive and that two medical opinions should suffice - a GP and then a psychiatrist.

He said that the involvement of an obstetrician/gynaecologist in the assessment is not appropriate as it is outside their area of expertise.

Consultant in general audit and community psychiatry Dr Yolande Ferguson also said obstetricians should not be expected to perform assessments out of their area of expertise.

She queried whether they could be placed in a position where they could veto the psychiatric assessments.

She also said the requirement that both psychiatrists should be attached to an institution registered with the Mental Health Commission does not reflect psychiatric practice.

Dr Ferguson said that child and adolescent psychiatrists are rarely attached to such an institution and suggested that that this be replaced by a "psychiatrist who is entered on the Specialist Register with the Medical Council".

A leading expert has warned that the proposed legislation could lead to higher suicide rates among young men by legitimising the taking of one's own life.

Professor Kevin Malone, who earlier today published a major study on suicide, said the measure could have unintended consequences.

He said highlighting female suicide in the legislation could send a signal to young males in that the State would be seen to legitimise suicide.

Professor Malone said that contrary to the notion of saving lives the net effect of the legislation could lead to greater loss of life by accelerating suicide rates among younger men in Ireland.

Dr Bernie McCabe, making a submission on behalf of Professor Patricia Casey, said recommending abortion in the absence of any scientific evidence was an abuse of the psychiatric profession by the State.

She also said that a growing number of psychiatrists felt that the Irish College of Psychiatry no longer reflected their views, and claimed that the college had withheld its full submission to the committee.

Consultant pyschiatrist Dr Sean O'Domhnaill told the committee the Bill was not about protecting human life in pregnancy but was about legitimising abortion.

It represented an enormous and retrograde step for the medical profession, turning doctors into abortionists, he said, describing a termination as a mediaeval response to a crisis pregnancy.

The committee, which heard from obstetricians last Friday, will report to Minister for Health James Reilly before the Bill goes before the Dáil and Seanad next month. 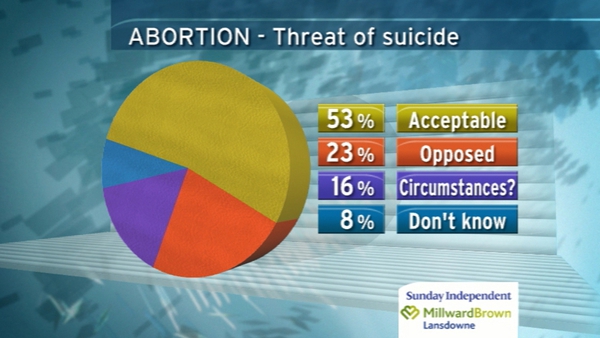