Britain’s Conservative Party today unveiled the question which will be posed in a referendum on Britain's future in Europe if David Cameron wins the next general election.

Voters will be asked the yes-or-no question: "Do you think that the United Kingdom should remain a member of the European Union?"

The wording was revealed in a draft bill published by the Conservative Party today, amid a continuing row within the coalition Government over the way forward on Europe.

Tory backbenchers have been given free rein by Mr Cameron to vote for an amendment in the House of Commons tomorrow, attacking the coalition's Queen's Speech for failing to include paving legislation for the referendum in 2017.

Mr Cameron cannot table today's draft bill as Government legislation because of opposition from Liberal Democrat coalition partners, but hopes that a Conservative MP will adopt it as a Private Member's Bill.

Mr Cameron today denied he had been panicked into bringing forward a referendum Bill in a bid to quell Tory unrest.

He insisted he was showing "leadership" on Europe and acting in the national interest by demanding better terms for Britain.

He admitted he was "frustrated" at being restrained by his Liberal Democrat coalition partners, but said his party would reap the benefits when the "dust settled" and the public saw only the Conservatives were offering a choice on EU membership.

In a round of broadcast interviews during his trip to the US today, Mr Cameron was asked whether he had "panicked".

"Not at all," he told Channel 5 News. "If this was a Conservative-only government we would just get on and legislate. We can't do that because we are in coalition.

"But I have always said that anything we can do to strengthen, add credibility to the pledge... we should do."

Mr Cameron rejected as "completely wrong" the idea that he was constantly shifting his position under pressure from his rank-and-file.

He told Sky News: "When all the dust has settled I think that people will be able to see that there is one party, the Conservative Party, offering that in-out referendum and two other mainstream parties, the Liberal Democrats and Labour, who oppose an in-out referendum...

"It is in the national interest to change Europe and change the relationship with Europe."

He conceded that some Tories wanted to have a referendum immediately, but added: "That's not my view."

Mr Cameron told ITV News: "People need to know that this is a serious pledge that they can bank."

The premier told the BBC he had launched the debate with the speech in January promising an in-out referendum on new terms.

"The whole reason that we are now having this debate is because of the act of leadership I gave," he said.

He added: "I am the leader who is offering change in Europe."

Mr Cameron said the publication of the referendum Bill had not been intended to head off a Commons amendment tomorrow criticising the absence of such legislation from the Queen's Speech.

He said he was "profoundly relaxed" about backbenchers supporting the amendment, saying they were merely acting in line with Tory policy.

The six-clause Bill states that a referendum will be held on the UK's continued membership of the European Union before 31 December 2017.

Anyone entitled to vote in a UK parliamentary election will be able to take part, and peers will also be eligible to vote.

Foreign Secretary William Hague said: "David Cameron has said if he is prime minister, there will be an in/out referendum in the next Parliament and that in this Parliament, we will look at all options to underline the fact that our commitment to the referendum is absolute.

"So today the Conservative Party is publishing a draft bill to legislate for an in/out referendum before the end of 2017.

"We will examine all opportunities to bring this bill before Parliament, including as a private members' bill."

But leading Conservative eurosceptics have dismissed the move as not enough, pointing out that such legislation rarely makes it through Parliament. 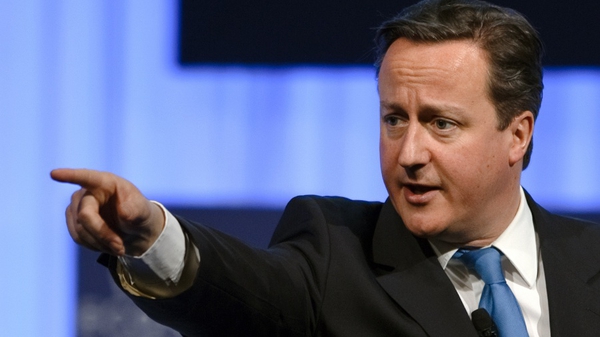