There has been mixed reaction to the draft legislation to deal with the 1992 Supreme Court judgment on the X Case.

Taoiseach Enda Kenny this morning said that the Protection of Life in Pregnancy Bill will not change Ireland's law on abortion.

He said that the agreed bill would bring certainty to pregnant women and legal clarity to doctors.

A few hundred protesters from groups opposed to abortion legislation gathered outside the Dáil this evening.

Minister for Social Protection Joan Burton has said Government was focussed intensely on doing what was required by the X Case, the report by the expert group - and women’s health, in drawing up the new heads of legislation on the abortion issue.

She said “perhaps” there were people in both government parties who would either not like what was contained in the proposed legislation, or may have wanted “to go further”.

However, she said the issue had been on the political and social agenda of the country for 20 to 30 years, and it would now be a "major achievement" for the Oireachtas to deal with it.

However, medical law lecturer at DCU Dr Adam McAuley said that the heads of the bill do not provide any further clarity on what a "real and substantial" risk to the life of a mother may be.

Speaking on RTÉ's Morning Ireland, Dr McAuley said that the heads of the bill "rigidly" adheres to the phrase used by the Supreme Court in the X Case, without elaborating further.

Dr McAuley believes that it would have been possible for the Government to phrase the text differently, and that failing to do so leaves the decision up to the woman's doctors.

He also described the process set out in the legislation as cumbersome.

It would also be advisable for the Government to carry out an audit to ensure the personnel required would be available, he said.

Dr Bernie McCabe, a consultant psychiatrist in the South Meath Mental Health Services, has described the bill as an abuse of the psychiatric profession.

She also said it was a possible abuse of women's rights.

Speaking on the same programme following the Government press briefing, Dr McCabe said that the integrity of psychiatrists and the evidence base they work from was being abused for political purposes.

She said the Government had chosen to ignore research carried out in the years since the X Case supporting the argument that termination is not a treatment where a woman feels suicidal during pregnancy.

Clinical Director of the National Maternity Hospital Dr Peter Boylan has said the legislation, if enacted, will bring more clarity to the law under which obstetricians work within Ireland.

Dr Boylan said he thinks that women can be reassured that if this legislation is enacted that they will have greater certainty.

He said that the legislation will enable doctors to take the mother's opinions into account to a greater extent and that is as it should be.

Dr Boylan said the law would give doctors greater confidence, as it would now be on the statute books, where as up to now it had been left to doctors to interpret the Supreme Court ruling.

Also speaking on Morning Ireland, Dr McCarthy said the proposals go back to the recommendation of the expert group, which was a well-thought out view of the situation.

Dr McCarthy said this will apply to a tiny, tiny group of women.

He stressed that having adequate perinatal services is very important, adding that the vast majority of women in pregnancy who are profoundly depressed or suicidal want help and counselling, not a termination.

Dr McCarthy said the vast majority of women with unwanted pregnancies will continue to do what they do now, because they are not going to go near psychiatrists, as they know they are not suicidal.

They will continue to travel elsewhere for a termination, he said, or buy medications on the internet and terminate their own pregnancies that way.

Labour TD and Minister of State at the Department of Health Alex White has said the proposals are a balanced, fair and sensitive approach to vindicating a right that a woman already has under the Constitution.

Speaking on RTÉ's News at One, Mr White said what Ireland currently has is a Constitutional right that is incapable of vindication, a right that cannot be availed of because there is no process and no procedure there to invoke it.

Mr White said from the Labour Party's point of view, it is satisfied that a commitment it gave in relation to legislating for the X Case is now going to happen.

He said there is no basis to say that these proposals are a stepping stone to more liberal abortion in Ireland.

Speaking on Newstalk, Fine Gael backbencher Michelle Mulhern, who opposes the law recognising the risk of suicide as a grounds for a termination, said the bill might very well be unconstitutional and unworkable.

However, she added that she was not going to rush anywhere, as she put it, saying she was very committed to being in Fine Gael.

Fine Gael Senator Fidelma Healy Eames has said that she is not happy with the bill.

Speaking on RTÉ’s Today with Pat Kenny, she said: "At this point, I can genuinely say I'm not happy. I'm not happy because the bill is conceding on the fundamental principle of life.

"We need to stop and think seriously here about what we're doing.

"My reading of it would be that what we're actually doing with this bill is that we are creating and fabricating a situation to make it legal to be able to intentionally take and target the life of a baby when there is absolutely no psychiatric evidence to support doing so and where it's not good for the mother or the pregnant woman."

Fine Gael TD for Cork South West Jim Daly, who had concerns about the issue of suicidal ideation being the grounds for the termination of a pregnancy, said some of those concerns have been eased by the proposed legislation.

However, his party colleague for Galway West, Brian Walsh, said that his position in relation to the suicidal ideation clause was well known and he would have serious difficulty with that.

Mr Walsh has been vocal in his opposition to any legislation that would include a clause on suicide.

Sinn Féin's Caoimhghín Ó Caoláin has said his initial reaction to the abortion proposals is positive and supportive.

Also speaking on Today with Pat Kenny, Mr Ó Caoláin said he believes the heads of the bill need to be considered carefully at the Oireachtas Health Committee.

He said he looks forward to hearing the views of the clinicians, in particular, on the practicality of implementing the procedures set out in the heads of the bill.

He said if the professionals who must implement the measures believe the bill is fit for purpose, then Sinn Féin will continue its "positive supportive position" on the issue.

Fianna Fáil Health Spokesperson Billy Kelleher said his party is "determined" to play a constructive role in the debate.

He said: "The Parliamentary Party will meet to consider the detail of the Heads of Bill this week.

"Fianna Fáil has continually stated its determination not to play politics with such an important issue and we restate that determination today."

'Exportation of abortion' will continue - Daly

Speaking in the Dáil this morning, United Left Alliance TD Clare Daly said the bill was not going to change the "exportation of abortion".

Ms Daly questioned why the Taoiseach had convened an expert group "only to ignore its findings".

She said the reason Ireland had not had more maternal deaths was "due to its proximity to Britain".

Mr Kenny pointed out that the proposals were in line with those of the expert review group.

He said: "The review group made the point, as was recognised in the ABC Case, that the issue of suicide and a suicide attempt is far more subjective."

Ms Daly said while the legislation was welcome, it did not go far enough.

In the Seanad, Independent Senator Rónán Mullen criticised the proposals.

He told the Seanad that it is "a dark day" as the Government is proposing something that is "destructive and dangerous".

Mr Mullen expressed disappointment with the Taoiseach for "leading us to this point".

He said that the lines coming from the Government about this being restrictive and necessary and life-saving are simply not true.

Many Senators who spoke on the issue during this morning's Order of Business were broadly supportive of the publication of the draft heads of the bill.

Leader of the House Maurice Cummins said that the Seanad would wait until after the Oireachtas Health Committee hearings before debating the issue and said he would not comment on it, or on Senators' views, until that time. 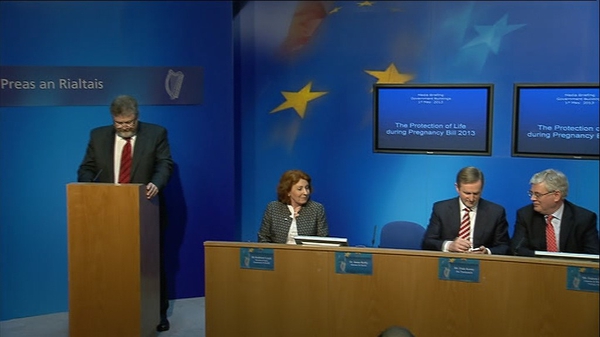