Oxfam Ireland has welcomed the move by Primark to compensate the families of workers killed while making its clothes in a factory which collapsed in Bangladesh last week.

He said that all large companies have a duty of care to all its workers, throughout its supply chain.

He said that people in Europe are all consuming and wearing clothes made by these factories and companies must ensure that people have what he called a living wage, and work in decent conditions.

At least 385 people were killed in the disaster.

It is the latest incident to raise serious questions about worker safety and low wages in the South Asian country that relies on garments for 80% of its exports.

The industry employs about 3.6 million people, most of them women, some of whom earn as little as $38 a month.

Clothing retailer Primark, which was supplied by one of the factories operating at Rana Plaza, said that it was working with a local NGO to help victims of the disaster.

"Primark will pay compensation to the victims of this disaster who worked for its supplier," said the company, owned by FTSE 100-listed Associated British Foods.

"This will include the provision of long-term aid for children who have lost parents, financial aid for those injured and payments to the families of the deceased."

Loblaw Companies Ltd, which had some of its Joe Fresh clothing line manufactured at Rana Plaza, said it too was offering compensation.

"We are working to ensure that we will deliver support in the best and most meaningful way possible, and with the goal of ensuring that victims and their families receive benefits now and in the future," a spokeswoman stated in an email.

Primark and Loblaw operate under codes of conduct aimed at ensuring products are made in good working conditions.

Spain's fashion label Mango told its followers on Facebook at the weekend that it had not carried out a "social audit" of Mayor's company Phantom-Tak, with which it had an unfilled sample order, but would have done so had it gone on to place a full order.

The International Labour Organisation, an agency of the United Nations, said it was sending a high-level mission to Bangladesh in the coming days. 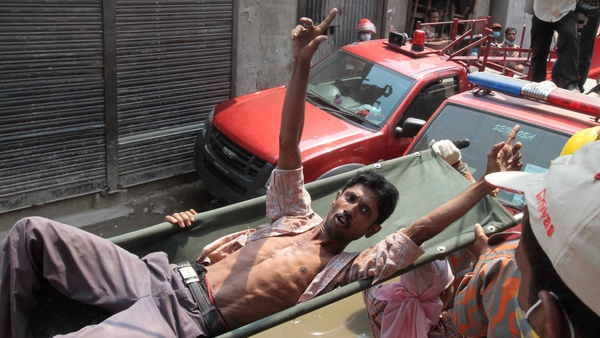