The Civil Public and Services Union will urge unions affiliated to the Irish Congress of Trade Unions to publicly sever all ties with the Labour Party in light of the Government proposals on Croke Park II.

Delegates also passed a motion instructing the executive to bring a motion to the Irish Congress of Trade Unions condemning the Labour Party for imposing called severe cuts and hardship on workers.

The motion also calls on Congress to use the centenary of the 1913 lockout to publicly condemn Labour policies and disassociate itself from the Labour Party - and wants other Congress unions to do the same.

It also states that no invitation should be extended to Tánaiste and Labour Leader Eamon Gilmore to attend this year’s ICTU Biennial Conference in July.

The motions were passed by an overwhelming majority.

Earlier the union voted unanimously to ballot for industrial action if the Government proceeds to impose cuts unilaterally, and oppose any attempt to tweak Croke Park II.

It also calls for further campaigning for higher taxes for the wealthy.

CPSU General Secretary Eoin Ronayne warned that the battle was only starting and that if the cuts are implemented, they will not be the last.

He said the CPSU would now hold further discussions with other unions opposing Croke Park II in order to build on the unity that is already there.

The CPSU has also voted to campaign to have salaries paid by cheque, postal order or cash to avoid bank charges payable on lodgements and withdrawal.

The motion from the Sligo branch said that depleted salaries can do without further loss through severe bank charges.

It states that what it calls "this indirect taxation" imposed by the banks is causing members unnecessary financial hardship and that they should have the option to receive their "meagre" salaries by other affordable means.

Delegates also voted to object to the imposition of monthly pay arrangements, instead of the present weekly or fortnightly arrangement.

IMPACT in warning over changes

The IMPACT trade union has warned that it will have to "respond" if the Government imposes measures that go beyond that negotiated settlement that was accepted by their members.

IMPACT was one of five unions that voted to accept the Croke Park II proposals, though they were rejected by a majority of the Government's 290,000 employees.

In an update to members, General Secretary Shay Cody said it would be totally unacceptable if the existing package was changed in ways that worsen the situation for IMPACT members to accommodate other unions.

He said the union had met Labour Relations Commission Chief Executive Kieran Mulvey, who is trying to establish if there is any basis for a negotiated settlement.

Mr Cody said it would clearly be in the interests of all unions to secure the best outcome in any process the LRC recommends.

Mr Mulvey is currently meeting each public service union and the management side separately to sound out their positions.

He is to report back to Minister for Public Expenditure and Reform Brendan Howlin within the next two weeks. 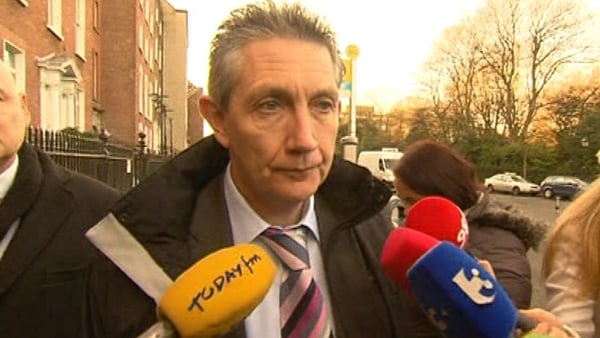