Sinn Féin's Martin McGuinness has claimed Unionists are not fully engaged in the North's political process.

Addressing the party's Ard Fheis in Castlebar in Co Mayo he said Unionists needed to end the pretence that they are not working with the Good Friday Institutions.

The North's Deputy First Minister told delegates that the Unionist attitude in government in Northern Ireland wasn't good enough - suggesting they were reluctant to acknowledge that they were working with Republicans.

Earlier there was sharp criticism of the Government here at the Ard Fheis.

Deputy Leader Mary Lou McDonald told delegates that the proposed extension to the Croke Park public service pay agreement was not the "stuff of reform".

Ms McDonald accused the Minister for Public Expenditure and Reform of being the "boot boy of Labour, waving the stick".

She said Brendan Howlin's "bully boy tactics haven't worked so far" and added that "they are not going to work now".

The party has committed to abolishing the Local Property Tax if elected to Government.

Finance spokesperson Pearse Doherty said the party would introduce legislation next week to "scrap" the tax.

He said Taoiseach Enda Kenny told the Dáil in the 90s that a property tax was morally unjust and unfair.

Mr Doherty acknowledged that the comments were made when there was no mortgage crisis, no personal debt crisis or unemployment crisis.

However, he said it was "all the more reason why Enda Kenny should hold on to his convictions".

Delegates will also discuss a border poll and the party's performance in government in Northern Ireland.

Secretary of State for Northern Ireland Theresa Villiers hinted this week that funds from London might be curtailed if there is not more political progress.

Tomorrow morning's session will be televised live, as will the address of party leader Gerry Adams tomorrow night. 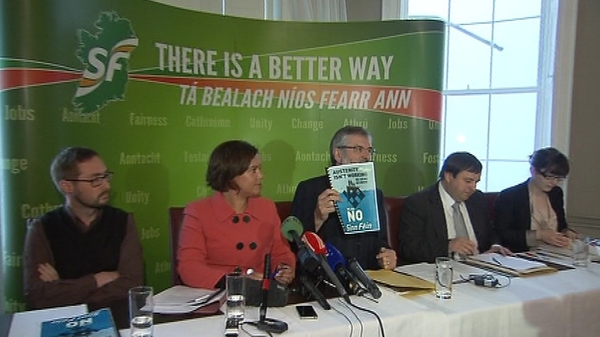