Eurozone and Ecofin finance ministers have agreed to extend the repayment of bailout loans for Ireland and Portugal by seven years.

The decision, which was made following meetings at Dublin Castle today, should mean a reduction in the amount of money that Ireland will need to borrow over the next decade.

He said that the agreement would have to be signed-off on by finance ministers from the 27-nation EU, which occurred later in the afternoon.

There had been some concern that the rejection by the Portuguese supreme court of pay cuts for civil servants would delay the decision, but assurances by the Portuguese that they will find other cuts in the next few weeks have been accepted by ministers.

In a statement this evening, the Eurogroup and Ecofin ministers said that both bailout programmes are "broadly on track despite challenging macro-economic circumstances".

They said: "We agreed in principle, subject to national procedures, to lengthen the maturities of the EFSM and EFSF loans to Ireland and Portugal by increasing the weighted average maturity limit by seven years.

"The extension would smooth the debt redemption profile of both countries and lower their refinancing needs in the post-programme period."

Speaking earlier at a press conference in Dublin Castle, Mr Dijsselbloom congratulated the country for its continued steadfast progress in implementing the programme.

He said that Ireland is a living example that adjustment programmes do work.

EU Commissioner Olli Rehn said the extension of Irish bailout maturities is another important step on the road to exiting the programme.

He said it was crucial that both countries continue along the lines of fiscal consolidation so that that the Irish and Portuguese people can put the harsh crisis they are experiencing behind them.

Mr Dijsselbloem said he expects the deal will be signed-off by national parliaments in EU member countries within a week.

However, he said there was "no conclusion" on legacy debt at the eurogroup discussions.

Minister for Finance Michael Noonan said the agreement was a "very positive development" for Ireland.

He said: "The details of the agreement will be worked out at a technical level, but it will keep downward pressure on our borrowing costs.

"This is particularly important as it will increase the ability of our banks, semi-states and large companies to raise capital at lower cost on the financial markets and will have a consequent benefit across the whole Irish economy."

Mr Noonan said Ireland remains on target to exit the bailout programme by the end of the year.

Fianna Fáil finance spokesperson Michael McGrath also welcomed the extension and said people will want to know how it will impact on future Budgets and on personal debt.

Mr McGrath said the Government still had to resolve the issue of the €30bn used to capitalise Irish banks.

Independent TD Stephen Donnelly has welcomed the agreement, but he said it is not a game-changer.

Mr Donnelly said it did not change the interest rates on the loans in the same way as Greece.

He said the real game was in the legacy debt and he was disappointed to see that there was no progress on that.

However, he added that it was a good day for the Government and the country.

Earlier, a senior official in the European Commission warned that Ireland needed an extension of its bailout repayment deadline to offset the negative fallout from the Cyprus bailout affair.

The official said that the Cyprus bailout and the inconclusive Italian election results had both pushed up borrowing costs "significantly" for Ireland.

In a letter to EU and eurozone finance ministers on the eve of today's meeting in Dublin, the official also warned that the "bail-in" of uninsured depositors in the Cyprus bailout "could have negative consequences on the confidence of depositors in Portugal and Ireland".

In the letter, seen by RTÉ News, President of the EU's Economic and Financial Committee Thomas Wieser pointed out to EU finance ministers that Ireland and Portugal were "still highly vulnerable" to developments in other eurozone countries, namely Cyprus and Italy.

For that reason it was "paramount" that finance ministers give a "strong signal" of support to Ireland and Portugal by agreeing to an extension of the deadline by which both countries are required to repay bailout loans.

Such a move would help "ring-fence" the two countries from turmoil associated with the Cyprus bailout.

Any delay in a "concrete decision" could disappoint the markets and offset the efforts of Ireland and Portugal to regain market confidence, Mr Wieser concluded. 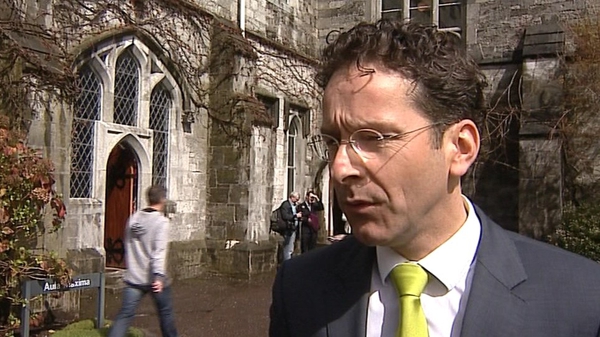 Ireland and Portugal to get more time on loans - Dijsselbloem