Preparations are under way for next week's funeral of former British Prime Minister Margaret Thatcher, who died yesterday following a stroke at the age of 87.

Ms Thatcher's life will be celebrated with a ceremonial funeral with a gun carriage, military procession and a service at St Paul's Cathedral on Wednesday 17 April.

It has emerged that she rejected the idea of a state funeral herself, and also insisted she did not want her body to lie in state or money to be spent on a fly-past.

Ms Thatcher's body was removed from the Ritz Hotel in London by private ambulance at about 12.20am following her death there yesterday morning.

International leaders and a wide range of people connected to Mrs Thatcher are expected to attend.

A ceremonial funeral requires the consent of Britain's Queen Elizabeth, which has been given.

Queen Elizabeth and the Duke of Edinburgh will both attend the service.

After the service, which will be televised, there will be a private cremation.

The British House of Lords has also been recalled tomorrow for MPs to pay tribute to the former Tory premier.

Street parties were held in republican parts of Derry and Belfast following her death.

Mr McGuinness tweeted: "Resist celebrating the death of Margaret Thatcher. She was not a peacemaker but it is a mistake to allow her death to poison our minds."

Speaking on the same programme, she said claims that the former prime minister's economic policies have led to the current financial problems are unfair.

Ms Currie said Ireland had benefited from Mrs Thatcher's policies and that many of the social changes that took place during her term in office continue to have a positive impact.

Former Maze hunger striker Laurence McKeown said for Irish republicans Mrs Thatcher was the latest in a long line of British leaders who carried out an imperial or colonial policy in Northern Ireland.

Speaking on RTÉ's Today with Pat Kenny, he said that some of the image that surrounds the former prime minister as "a leader who wasn't going to give anything" is slightly not the case.

But he said that in relation to the hunger strikers, people in Northern Ireland had expected more from a woman.

Mr McKeown said Mrs Thatcher was part of a structure that supported her in what she was doing.

British MPs and friends who saw her regularly said she remained alert and interested in politics until relatively recently.

She was said to have been delighted that Mr Cameron, and before him, Gordon Brown extended invitations to visit 10 Downing Street and Chequers.

The Thatcher family has asked well-wishers to donate to the Royal Hospital Chelsea instead of leaving flowers. 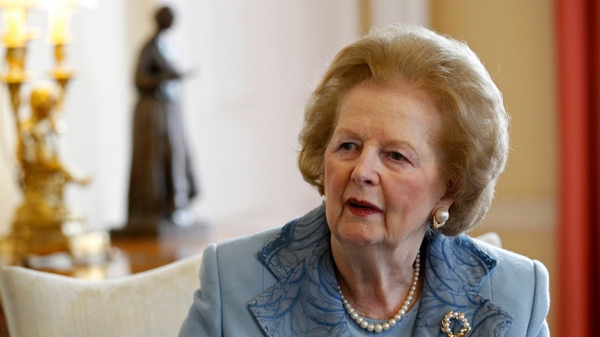