South Korea’s new president has warned her country will strike back if the North stages any attack on its territory.

North Korea says the region is the brink of a nuclear war in the wake of United Nations sanctions imposed for its February nuclear test and a series of joint US and South Korean military drills that have included a rare US show of aerial power.

North Korea said on Saturday it was entering a "state of war" with South Korea in response to what it termed the "hostile" military drills being staged in the South.

However, there have been no signs of unusual activity in the North's military to suggest an imminent aggression, a South Korean defence ministry official said last week.

"If there is any provocation against South Korea and its people, there should be a strong response in initial combat without any political considerations," President Park Geun-hye told the minister of defence and senior officials at a meeting this morning.

The South has changed its rules of engagement to allow local units to respond immediately to attacks, rather than waiting for permission from Seoul.

After criticism that its response to the shelling of a South Korean island in 2010 was too slow, the South’s government has threatened to target North Korean leader Kim Jong-un and to destroy statues of the ruling Kim dynasty in the event of any new attack.

The threat has outraged the North.

South Korea and its ally the US played down Saturday's statement from the official KCNA news agency as the latest in a stream of tough talk from the North.

North Korea stepped up its rhetoric in early March, when US and South Korean forces began annual military drills that involved the flights of US B-2 stealth bombers in a practice run, prompting the North to puts its missile units on standby to fire at US military bases in the South and in the Pacific.

The US also deployed F-22 stealth fighter jets yesterday to take part in the drills. The F-22s were deployed in South Korea before, in 2010.

North Korea has cancelled an armistice agreement with the US that ended the Korean War and cut all hotlines with US forces, the United Nations and South Korea.

White House National Security Council spokeswoman Caitlin Hayden said North Korea's announcement that it was in a state of war followed a "familiar pattern" of rhetoric.

Russia, which has often balanced criticism of North Korea, a Soviet-era client state, with calls on the US and South Korea to refrain from belligerent actions, said a recurrence of war was unacceptable.

"We hope that all parties will exercise maximum responsibility and restraint and no one will cross the point of no return," Grigory Logvinov, a senior Russian Foreign Ministry official, said.

France said it was deeply worried about the situation on the Korean peninsula while NATO Deputy Secretary General Alexander Vershbow said the alliance hoped "that this is more posturing than a prelude to any armed hostilities".

Even the new pope has joined in the calls for peace.

China has repeatedly called for restraint on the peninsula.

However, many in South Korea have regarded the North's willingness to keep open the Kaesong industrial zone, located just a few kilometres north of the heavily-militarised border and operated jointly by both sides, as a sign that the North will not risk losing a lucrative source of foreign currency by mounting a real act of aggression.

The Kaesong zone is a vital source of hard currency for the North and hundreds of South Korean workers and vehicles enter daily after crossing the armed border.

It was still open today despite threats by the North to shut it down.

"If the puppet traitor group continues to mention the Kaesong industrial zone is being kept operating and damages our dignity, it will be mercilessly shut off and shut down," KCNA quoted an agency that operates Kaesong as saying in a statement.

Closure could also trap hundreds of South Korean workers and managers of the more than 100 firms that have factories there.

The North has previously suspended operations at the factory zone at the height of political tensions with the South, only to let it resume operations later. 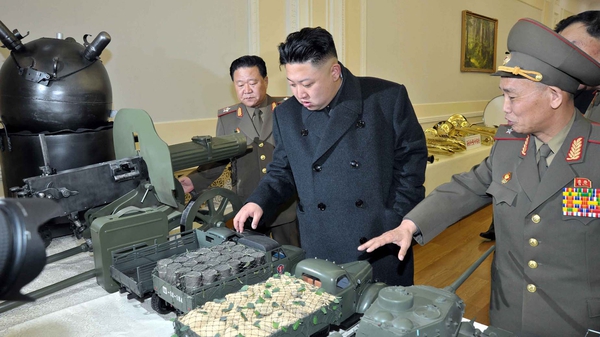 North Korea in 'state of war' with South