Residents of the Suleiman Shah camp in Akcakale, a Turkish town near the Syrian border, said young men started a large demonstration after a faulty electrical supply outlet set fire to a tent earlier that day.

Three brothers aged 7, 18 and 19 were injured in the tent fire, Turkish officials said.

Camp residents said one of the brothers had died.

Elsewhere, Iran has criticised the Arab League for allowing an opposition leader to fill Syria's vacant seat at the organisation's annual summit.

Iranian media said the government had described it as "dangerous behaviour".

Syrian membership to the Arab League was suspended in November 2011.

The seat at yesterday’s summit was filled by Moaz Alkhatib, the leading figure among Syria's opposition coalition that is battling to overthrow President Bashar al-Assad.

Shia Iran has given crucial backing to Mr Assad since the protests erupted in Syria in 2011.

Iran regards him as key in the axis of resistance against Israel and a defence against what it says are extremist Sunni groups operating in Syria.

Deputy Foreign Minister Hossein Amir Abdullahian said: "Assigning Syria's seat to the Arab League to those who don't have the backing of the people establishes a pattern of dangerous behaviour for the Arab world that can set a new precedent for other members of the Arab League in the future."

"These actions will bring an end to the organisation's role in the region," he said.

At the summit, Mr Alkhatib asked US Secretary of State John Kerry for American forces to help defend rebel-controlled northern parts of Syria.

He was seeking help with Patriot surface-to-air missiles based in Turkey.

The summit also endorsed the provision of military aid to Syrian rebels.

A communiqué affirmed member states had a right to offer assistance "including military, to support the steadfastness of the Syrian people and the Free Army".

Iran has proposed a six-point plan for Syria and emphasised the importance of elections and reforms, but does not accept the removal of Mr Assad.

It says a solution to the crisis cannot be imposed from outside the country. 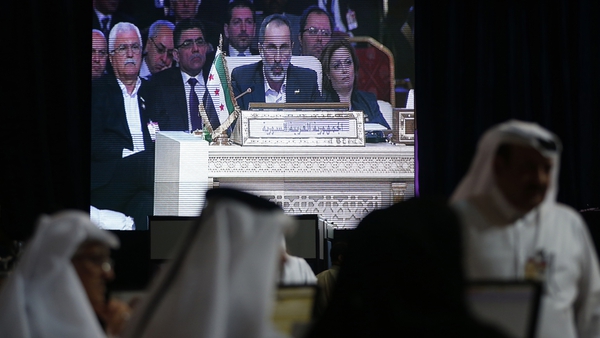