Cyprus is expected to complete capital control measures to prevent a run on the banks by depositors anxious about their savings after the country agreed a painful rescue package with international lenders.

Cypriots have taken to the streets of Nicosia in their thousands to protest at a bailout deal that they fear will push their country into an economic slump and cost many their jobs.

European leaders said the deal averted a chaotic national bankruptcy that might have forced Cyprus out of the euro.

With banks due to reopen on Thursday, Finance Minister Michael Sarris said he expected the control measures to be ready by noon (10.00 Irish time) on Wednesday.

"Banks will open on Thursday ... We will look at the best way to limit the possibility of large sums of money leaving, and not imposing punitive conditions on the economy, businesses and individuals," Sarris said in a Cyprus television interview.

The central bank governor said earlier that "loose" controls would apply temporarily to all banks.

Earlier, the finance minister said they could be in place for weeks.

Banks have been shut since final bailout talks got under way in mid-March.

Up to 3,000 high school students protested at parliament, the first major expression of popular anger after Cyprus agreed the €10 billion rescue with the European Union, International Monetary Fund and European Central Bank.

Outside the central bank, about 200 employees of the country's biggest commercial lender, the Bank of Cyprus, demanded the resignation of the central bank governor, Panicos Demetriades, chanting "Hands off Cyprus" and "Disgrace".

Under the terms of the bailout, the second largest lender, Cyprus Popular Bank, is to be shut down and its accounts of under €100,000 combined with those of the Bank of Cyprus.

Accounts of more than €100,000 at both banks will be frozen, with depositors, many of them rich foreigners, likely to lose much of their investments.

By protecting state-guaranteed deposits of up to €100,000, the bailout reversed a previous deal struck on 16 March that would have imposed a levy on small depositors as well as big ones, which had infuriated Cypriots and was vetoed by parliament.

Government officials have estimated big depositors could now face loses of around 40%.

Many Cypriots say they do not feel reassured by the new deal, however, and are expected to besiege banks as soon as they reopen after a shutdown that began over a week ago.

The long closure of the banks has hurt business, according to Andreas Hadjiadamou, president of the Cyprus Supermarkets Association, who said consumer confidence had "hit the floor".

Maria Benaki, who runs a family silverware business on Nicosia's biggest shopping street, said she had not had a customer in days.

"The situation is dire," she said. "What will happen at the end of the month when I need to pay my bills?" 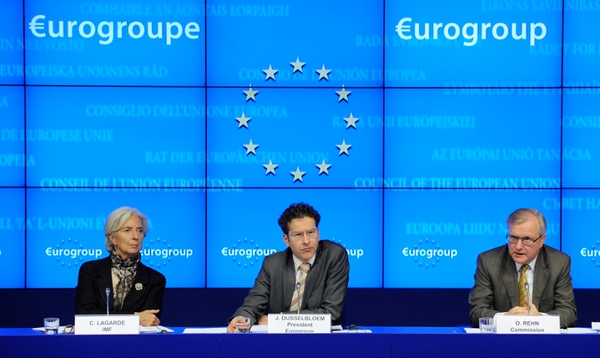