The European Union has suspended most sanctions on Zimbabwe after voters there approved a new constitution.

The decision paves the way for an election to decide whether President Robert Mugabe extends his 33-year rule.

The EU move is the most far-reaching step so far in its strategy of easing sanctions to encourage political and economic reform in Zimbabwe.

The southern African country has been governed by an uneasy coalition since Mr Mugabe and Prime Minister Morgan Tsvangirai were forced into a power-sharing deal after disputed 2008 elections.

"The EU...has today agreed to immediately suspend the application of measures against 81 individuals and eight entities," EU foreign policy chief Catherine Ashton said in a statement.

A number of "key decision makers" would remain under EU sanctions until peaceful, transparent and credible elections had been held, Ms Ashton said.

Zimbabwe is expected to hold presidential and parliamentary elections in the second half of the year in what will be seen as a showdown between Mr Mugabe and Mr Tsvangirai.

The European Union first imposed sanctions on Zimbabwe in 2002, in protest against human rights abuses and violations of democracy under Mr Mugabe's rule. 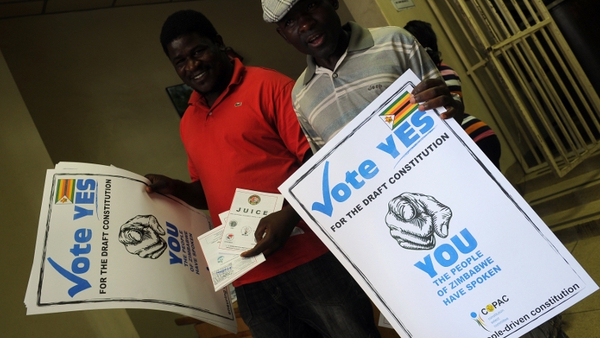