Minister for Public Expenditure and Reform Brendan Howlin has declined to confirm how many side letters or ancillary deals were issued to unions after completion of the Croke Park II talks on 25 February.

He was speaking in response to a parliamentary question from Fianna Fáil spokesperson on jobs, enterprise and innovation Dara Calleary.

Mr Howlin would only say that "a number of such letters" clarifying aspects of the proposals for a draft public service agreement were issued.

He said they were sent to member unions of the Public Services Committee of the Irish Congress of Trade Unions by the Labour Relations Commission and by sectoral management as appropriate, in parallel with the main proposals published by the LRC.

Mr Howlin added that his department had written to the Public Services Committee indicating his intentions concerning application of various measures to public service pensioners.

No agreements had been made, ancillary or otherwise, since the completion of the LRC facilitated process and the publication of the LRC proposals Mr Howlin said.

He also said that no further negotiations are under consideration.

Mr Howlin said the Government was satisfied that the Croke Park proposals would deliver the required €1bn savings in the pay and pensions bill over the lifetime of the agreement.

The achievement of those savings would not be affected by commitments given in any of the letters of clarifications issued to the parties which had been brought to his attention, he said.

Mr Howlin said it was a common and long-standing feature of collective agreements and industrial relations practice that letters are issued to clarify points of understanding or agreement between sectoral management and unions.

Asked about the number and cost of anticipated retirements from the public service in 2013 and 2014, Mr Howlin said the data was currently being prepared and would be published in the forthcoming Revised Estimates Volume for 2013.

Breakdown of pay savings not yet quantified - Reilly

Meanwhile, Minister for Health James has confirmed that the breakdown of pay savings from the Croke Park II proposals has not yet been quantified.

He was speaking in response to a parliamentary question from Mr Calleary,

However, he said that the service plan contains no specific allocations in relation to that €150m, and they are not yet reflected in either the programme or regional budgets.

Those budgets would be adjusted downwards later this year when the breakdown of pay savings under the Croke Park proposals has been "definitively quantified", Mr Reilly said.

He added that the Revised Estimates Volume for 2013 will set out the revised allocations arising from the Croke Park II proposals.

Mr Reilly said a key requirement for the health service during the process was to protect frontline care while at the same time significantly reducing costs.

Subject to the ratification of the proposal, he said, significant savings would be achieved through cuts in overtime rates, Sunday premium pay and the elimination of twilight payments, the progressive reduction in salaries over €65,000, and delays in paying increments.

He also noted that longer working hours would deliver a long-term, sustainable and unprecedented increase in productivity, which would substantially reduce reliance on overtime and agency working, and facilitate further staffing reductions in 2013 and 2014.

Meanwhile, garda representative bodies have claimed that Tánaiste Eamon Gilmore was "got at" to toe the Government line on pay cuts planned in the new Croke Park Agreement.

The Association of Garda Sergeants and Inspectors and the Garda Representative Association protested outside Leinster House this afternoon.

Unions opposed to the proposals have been hoping that Labour would step in to mitigate the more severe elements of the cuts for Government employees.

However, a spokesperson for the Tánaiste yesterday confirmed that he "fully supports" Minister for Public Expenditure and Reform in implementing the proposed cuts.

This included the fact that the original agreement will cease immediately if unions reject the latest deal.

AGSI General Secretary John Redmond said the Tánaiste had "changed his tune" and had been "gotten at" by the rest of the Government.

That view was echoed by GRA General Secretary PJ Stone.

Mr Stone said the last time the GRA had protested Mr Gilmore and Minister for Social Protection Joan Burton had encouraged it to stick with its protest.

He asked what had happened to Mr Gilmore in the meantime.

Mr Redmond said the AGSI was in no doubt that the original agreement would stay in place until mid-2014 and it was prepared to take a legal challenge to protect its position.

He would not specify how far it was prepared to escalate its current policy of non-cooperation with the use of personal equipment in the course of their duties and refusing to volunteer for overtime.

However, he said members would do whatever was necessary to protect their pay.

Mr Stone said the GRA was trying to keep a lid on the situation, but the members were extremely annoyed.

Elsewhere, the Association of Higher Civil and Public Servants has said proposed cuts for higher-earning public sector workers under the new Croke Park deal are "unfair and disproportionate" and it would be fairer if the Government increased income tax for everyone earning over €65,000.

Speaking on the RTÉ's News at One, AHCPS Assistant General Secretary Ciaran Rohan said everyone should bear the burden and the way to do this was through the taxation system.

His union is recommending a No vote to members as they prepare to ballot on the extension to the Croke Park deal.

He said: "What we are saying is everyone has to put their shoulder to the wheel and bear their share. We are prepared to play our part, but we're saying that it's a wider issue than just the public service."

Mr Rohan also said his members believed that this would not be the "last ask" from the Government, despite assurances from Minister Howlin that the extension to the agreement would give protection to public sector pay until 2016.

He said: "The proposals that are there at the moment are unfair and disproportionate. There is a fairer way to address the issues that are there ... It's a burden that everybody would face, public and private alike. 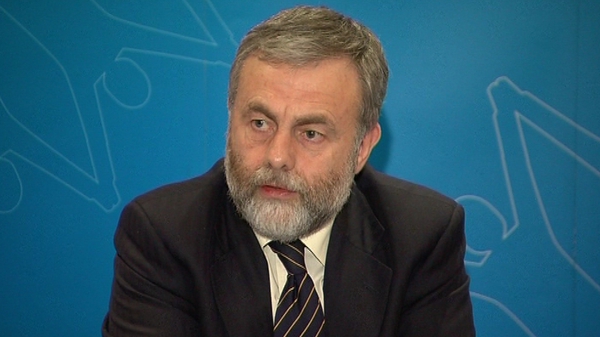