SIPTU General President Jack O'Connor has said the executive council will campaign in favour of the extension to the Croke Park deal.

Mr O'Connor said the union is recommending acceptance of the extension because it wants to keep the protections of the agreement.

He said the proposals are the best that could be obtained through negotiations, and the best strategy for workers is to stick with the proposed collective agreement.

He said voting No will not make the problems in Ireland go away, and will leave workers facing the cuts agenda without agreement protections.

Mr O'Connor urged every SIPTU member to consider the proposal carefully and decide whether they can go along with them, with the objection of recovering lost ground later.

The decision came after a five-hour meeting at Liberty Hall in Dublin this afternoon.

The Croke Park proposals call for a further €1 billion reduction in the State payroll bill over the next three years.

They include pay cuts for staff on over €65,000 a year, increment freezes, longer working hours and reductions in overtime and premium rates.

Those advocating acceptance, including IMPACT and the Public Service Executive Union, say it is the best deal that could be secured.

They say the alternative would be pay cuts imposed by the Government.

Opponents, including unions representing doctors, nurses, some teachers, higher civil servants and gardaí, say the cuts are too extreme.

The 24/7 Frontline Alliance has said it will continue its campaign of lobbying against the agreement.

The Prison Officers' Association has decided to recommend that its 3,300 members should accept the Croke Park proposals.

The POA had been campaigning against the proposals with the 24/7 Frontline Alliance prior to the conclusion of the negotiations three weeks ago, but remained in the talks to the end.

Under a side agreement with management, the POA was allowed to retain all existing premium payments for weekend and evening work, while many other frontline workers, including nurses and gardaí, lost the entitlements.

General Secretary John Clinton said the POA executive believed it could not achieve anything better than the Croke Park proposals by negotiation.

He said he had informed other unions in the alliance opposing the proposals of the POA decision.

Mr Clinton said the POA had made it clear that the key issue for it was retention of premium payments and it had secured that.

He said it would make no sense for it to continue to campaign against the agreement with the alliance while the executive recommended acceptance.

The Irish Nurses and Midwives Organisation said the campaign of the 24/7 Frontline Alliance against the Croke Park proposals will continue, despite the POA decision.

INMO General Secretary Liam Doran said it respected the decision of the POA and had been anticipating it for some weeks.

He said the alliance campaign, which includes the INMO, the Irish Medical Organisation, UNITE, the Civil Public and Services Union as well as the two garda representative bodies, would continue.

Rally hears calls for No vote

Four leading trade union leaders called for a No vote at a rally this evening opposing the proposals for the extension of the Croke Park agreement.

Up to 200 people attended the rally at City Hall in Cork this evening.

It is the first in a series of rallies being held nationwide and organized by the INMO, the IMO, UNITE and the CPSU.

The CPSU's general secretary Eoin Roynayne told the gathering that the proposals would unfairly penalise workers on lower incomes and women in particular.

Asked about the Prison Officers' Association's decision to recommend a Yes vote, Steve Tweed, of the Irish Medical Organization said they had to respect the unions and the decisions they make within their executives, but the IMO took the decision to reject the deal.

The next rally takes place in Letterkenny, in Co Donegal next Tuesday. 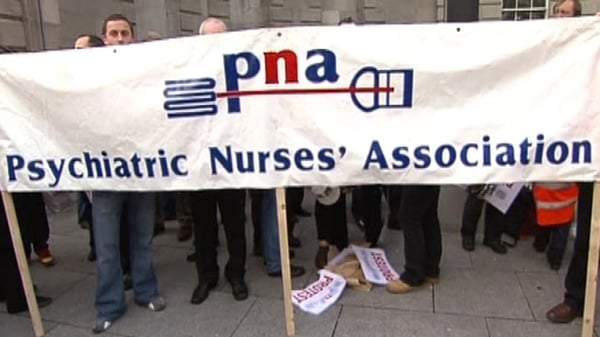