Residents of the Falkland Islands have voted almost unanimously to stay under British rule in a referendum over sovereignty.

The official count showed 99.8% of islanders voted in favour of remaining a British Overseas Territory in the two-day referendum.

The vote was rejected by Argentina as a meaningless publicity stunt.

Only three No votes were cast.

"Surely this must be the strongest message we can get out to the world," said Roger Edwards, one of the Falklands assembly's eight elected members.

"(The message) that we are content, that we wish to retain the status quo ... with the right to determine our own future and not become a colony of Argentina."

Turnout was 92% among the 1,649 Falklands-born and long-term residents registered to vote.

British Prime Minister David Cameron called on Argentina to respect the wishes of the islanders.

He said the vote was the "clearest possible result there could be".

Three decades after Argentina and Britain went to war over the South Atlantic archipelago, residents have been perturbed by Argentina's increasingly vocal claim over the islands.

They are called the Malvinas in Spanish.

Local politicians hope the resounding Yes vote will help them lobby support abroad, for example in the United States, which has a neutral position on the sovereignty issue.

The mood was festive as islanders lined up in the cold to vote in the capital, Stanley.

Some wore novelty outfits made from the red, white and blue Union flag.

Argentina's President Cristina Fernandez has piled pressure on Britain to negotiate the sovereignty of the islands, something London refuses to do unless the islanders request talks.

Most Latin American countries and many other developing nations have voiced support for Argentina, which has stepped up its demands since London-listed companies started drilling for oil and natural gas off the Falklands craggy coastline.

They say the sovereignty dispute must be resolved between Britain and Argentina, and cite UN resolutions calling on London to sit down for talks. 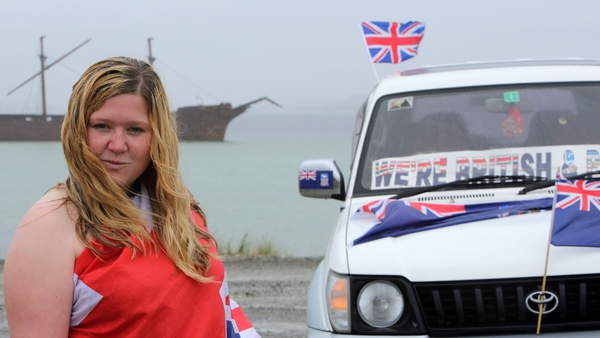